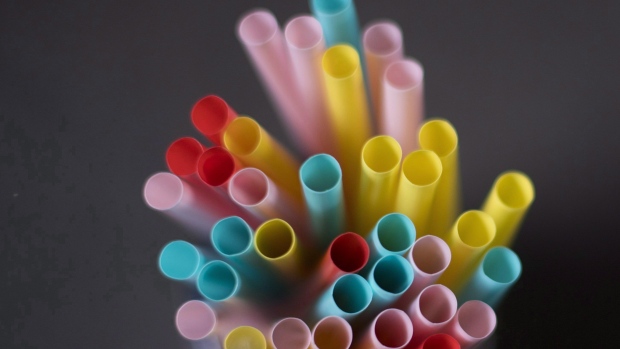 Plastic straws are pictured in North Vancouver, B.C. on Monday, June 4, 2018. The federal government will announce a plan Monday to ban harmful single-use plastics such as drinking straws as early as 2021. THE CANADIAN PRESS Jonathan Hayward

OTTAWA - A national ban on the most harmful single-use plastics will very likely force restaurants and fast-food outlets to find non-plastic materials for takeout and delivery containers but plastic bottles for water and soda are more likely to be improved rather than phased out.

Prime Minister Justin Trudeau said Monday his government is starting the regulatory work to ban toxic single-use plastics because the garbage infiltrating the world's waterways is out of hand.

“As parents, we're at a point where we take our kids to the beach and we have to search out a patch of sand that isn't littered with straws, Styrofoam or bottles,” he said. “That's a problem, one that we have to do something about.”

Nothing is going to be banned overnight, with the process to implement a federal ban or limitations on a product under the Canadian Environmental Protection Act usually taking two to four years. The goal is to make decisions on everything on the list by 2021.

“It's going to take a little bit of time to make sure we get it absolutely right because this is a big step but we know that we can do this by 2021,” Trudeau said.

The process includes an assessment of each product, a proposed regulation, a public comment period, and then the final decision by cabinet.

Trudeau said Canada's plan will “closely mirror” that of Europe. In March, the European Parliament agreed that by 2021 the European Union will ban almost a dozen single-use products including plastic plates, cutlery, cups, straws, plastic sticks in cotton swabs, balloon sticks and stir sticks, and Styrofoam cups and take-out food containers. Oxo-degradeable plastics including plastic grocery bags, which break down into tiny pieces with exposure to air but never fully disappear, are also to be banned.

Plastic beverage bottles won't be banned in Europe but the EU will require them to contain a minimum of 30 per cent recycled material by 2030, and a collection rate for recycling or reuse of 90 per cent by 2029. Europe is putting new onus on producers of plastics to ensure they are recycled or reused, including the makers of fishing nets, which are among the most prevalent plastics trapping fish and polluting water bodies.

An official at Environment Canada, speaking anonymously because he wasn't authorized to speak publicly, said Canada's focus will be on banning things that are the most harmful, or the hardest to recycle. Everything will be run through a full scientific assessment as well as a socio-economic-impact review before any proposals for bans or regulations of materials are made, he said. There may be some exceptions to bans if certain uses of products are critical or irreplaceable, he said.

Styrofoam take-out containers are among the products most likely to be banned in Canada. While restaurants favour them because they're cheap, lightweight and good for hot or cold food, there are already a number of alternatives. Styrofoam containers are also among the worst for the environment; they break down into tiny little pieces that are easily ingested by fish, animals and ultimately humans.

Plastic straws are already on their way out by restaurants' choice, but will almost certainly be covered by the Canadian ban nonetheless. A high-profile campaign against plastic straws last year drove numerous multi-national food and beverage companies - including A&W and Starbucks - to replace plastic straws with paper versions, and many restaurants just stopped automatically putting straws in drinks as a first step.

Plastic bottles, however, are unlikely to make the list of banned products. The official said bottles are an area where Canada could require a greater amount of recycled material, and set national targets so 90 to 100 per cent of them are collected for recycling. All of that would trigger provincial and municipal governments to up their recycling games.

Canada currently throws out 12 times the plastic it recycles, and there are only about a dozen domestic recycling plants. Requiring more recycled content in bottles or other plastic products would create a larger market for recycled plastic material that would in turn, spur economic activity in the sector and an explosion in the number of sorting and recycling plants.

A recent report done by Deloitte and ChemInfo Services for Environment and Climate Change Canada found a 90-per-cent plastics recycling rate in Canada could create 42,000 jobs.

Environment groups were cautiously optimistic about the announcement Monday, saying they want to see the follow-through but noting the best way to reduce plastic garbage is to reduce the plastic we produce and use to begin with.

Sarah King, head of the oceans and plastics campaign at Greenpeace Canada, called it a good first step.

NDP MP Gord Johns, whose motion calling for a national strategy to combat plastic pollution passed with unanimous support in December, said the Liberals' move is a good beginning but it is not a full strategy to get to zero plastic waste.

Conservative Leader Andrew Scheer shrugged it off as another empty announcement devoid of specifics and without any information on the implications for prices for consumers or for jobs in the plastics industry.

The Canadian Federation of Independent Business is also leery of the proposals, with president Dan Kelly asking for a “thorough economic impact assessment” before anything is banned.

“It would be irresponsible to put such a sweeping measure into place without fully studying the possible impacts on Canada's small businesses first,” said Kelly. “There is no reason why sound environmental policy and economic development can't go hand in hand.”