Submachine gun, silencers, $50K worth of drugs seized in Ajax 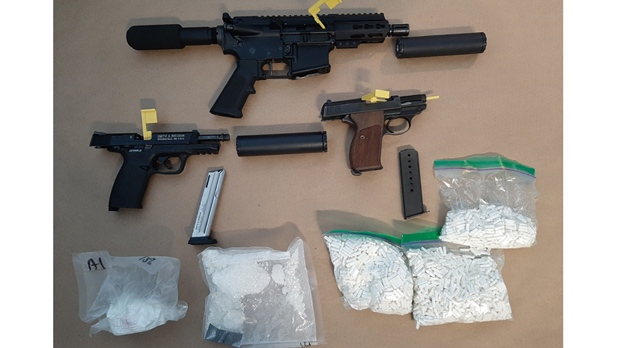 A submachine gun, two silencers, two handguns and a quantity of drugs is shown in a handout image from the OPP and DRPS.

A 37-year-old Ajax man is facing numerous charges after a submachine gun, silencers, handguns and a quantity of cocaine and pills was allegedly seized in a drug raid on his home on Thursday.

OPP officers that make up the provincial weapons enforcement unit, along with officers from Durham Regional Police, searched a home and parked car on Fearn Crescent, in the Kingston Road West and Westney Road South area, on Thursday.

They allegedly seized a fully automatic machine pistol, two silencers, a 9mm handgun and a .22 calibre Smith and Wesson handgun.

Possession of fully automatic firearms and silencers are strictly prohibited in Canada beyond official use in the military and law enforcement.

Anyone with information about this incident is encouraged to email the OPP at PWEU@OPP.ca.