Suburbs not always the cheapest option for Toronto homebuyers: report 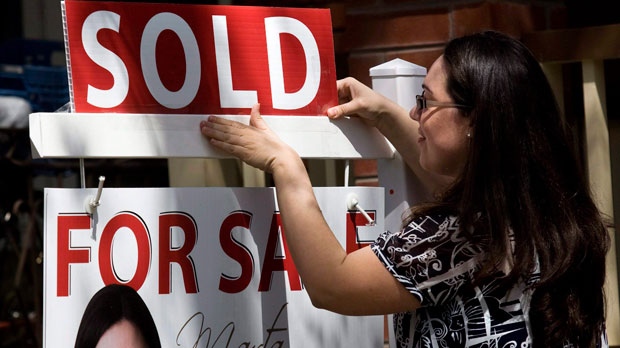 A real estate agent puts up a "sold" sign in front of a house in Toronto Tuesday, April 20, 2010. (The Canadian Press/Darren Calabrese)

Prospective homebuyers who pack up and move to the suburbs may not be saving as much money as previously thought, according to a recently released report by RBC and the Pembina Institute.

The new report titled ‘Location Matters’ takes a look at the bigger picture for homebuyers, analyzing how “location-related” costs factor into the sticker price of a home.

The report profiles four prospective Toronto-area homebuyers and the costs associated with living in five different suburban and downtown locations.

When considering car ownership, fuel costs and commuting costs, including time that is eaten up while sitting in traffic, the report suggests that buying a home in the suburbs may actually be more costly in some cases.

"We did an earlier study with RBC where we found out that 80 per cent of homebuyers in the GTA would rather live in walkable neighbourhoods that are close to transit, closer to work, even if it meant giving up a large house and large yard," Cherise Burda, the Ontario director at the Pembina Institute, told CP24 Wednesday.

"Most of these people were being priced out and having to go far afield to find a cheap sticker price on their house. Once they got there, they found out that commutes were really long and their costs were very high in terms of transportation."

In one of the case studies, the report discovered that a home in Milton with sticker price $180,000 lower than a home in Port Credit would actually cost the homeowner a significant amount more per month.

"When you factored in the transportation costs, that home cost $1,000 more a month over the lifetime of a mortgage," Burda said.

Eliminating one car from a household, Burda said, can save the average homebuyer $200,000 over the lifetime of a mortgage.

"My advice would be try and find a location that gives you options to get to work other than both of you driving," she said.