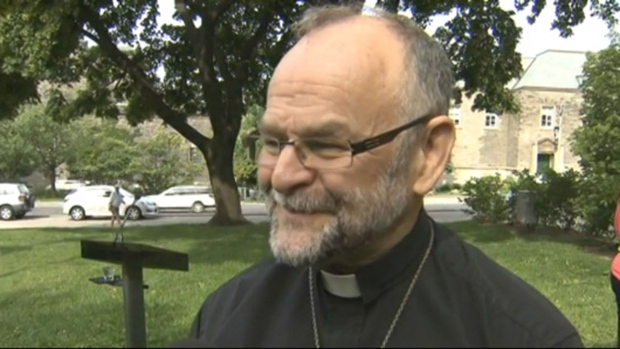 Reverend Brent Hawkes is pictured in this undated file photo.

Congregants and friends of a well-known Toronto preacher accused in a historic sex assault are expressing their shock and disbelief after the allegations surfaced Monday.

Rev. Brent Hawkes is facing charges in connection with an alleged assault on a male that occurred 40 years ago in Nova Scotia.

The alleged incidents are believed to have taken place between Aug. 1, 1974 and Dec. 31, 1975, the Nova Scotia Public Prosecution Office said.

Hawkes, the senior pastor of the Metropolitan Community Church of Toronto and a gay rights activist, said in a statement Monday that “the purported events simply did not take place.”

“While it is impossible for me to understand where these almost 40 year old accusations come from, I have a faith that will sustain me as well as faith in Canada’s justice system,” Hawkes said in the statement. “For 38 years, I have fought, with all that I have, for equality for my community. I have fought to give voice to those without voice. Now I will fight, with all that I have, these accusations.”

On its website, the Metropolitan Community Church of Toronto said the alleged incident took place before Hawkes became a pastor at the church. The group also said that the church is not funding Hawkes’ legal defence.

However the MCC Toronto’s board of directors also released a statement praising Hawkes as a “cherished and respected leader.”

“He has been repeatedly recognized in Canada and the United States as an advocate of human rights and is the recipient of the Order of Canada and numerous awards and honourary degrees,” the board said in its statement. “The Board of MCC Toronto knows Rev. Hawkes as a man of high integrity and an inspirational community leader who has led MCC Toronto for 38 years in its quest for tolerance and inclusiveness. Brent has our steadfast support.”

Other friends also lined up to throw support behind Hawkes Tuesday.

“Brent Hawkes has been a friend and inspiration to thousands of people, and that includes us - stay strong Brent and John, we're with you,” former Ontario premier and Liberal leader Bob Rae wrote on Twitter.

Kevin Bourassa, one of the two men married by Hawkes in Toronto’s first gay marriage in 2001, also took to Twitter to defend the preacher.

“Rev. Brent Hawkes changed my life. He & MCC Toronto empowered me & Joe to fight for our rights as equal citizens,” Bourassa wrote.

“He is a person of great character and integrity, a person marked by a deep capacity for compassion and empathy. Not only do I believe he is incapable of seeking to harm another person but also I believe that truth-telling is at the very core of his being,” Scott said in the post.

Hawkes has been charged with indecent assault on a male and gross indecency, the prosecutor’s office said.

He is set to appear in Kentville Provincial Court in Nova Scotia on April 13.