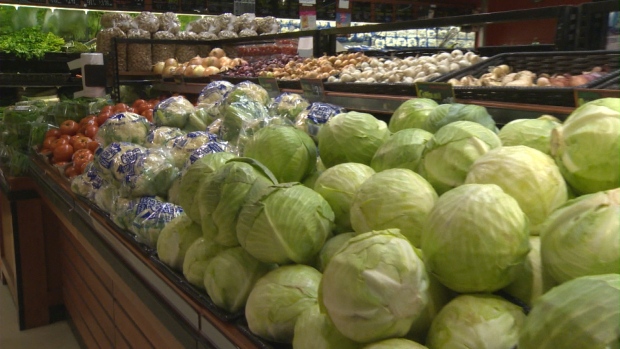 TORONTO -- Some Canadians are snubbing expensive fruits and vegetables, instead turning to frozen produce and juice as less-pricey alternatives, a new survey by researchers from two universities has found.

Researchers from the University of Guelph's food institute and Dalhousie University surveyed more than 1,000 adults in Canada between May 12 and 24 to determine if these rising prices have changed consumer grocery shopping behaviours.

The results suggest low-income households, less-educated folks and young people are more vulnerable to produce's ongoing price volatility, said Sylvain Charlebois, the dean of the faculty of management at Dalhousie University in Halifax, N.S., and one of the report's authors.

About one-quarter of respondents said they ate less fruits and vegetables over the past 12 months. Respondents with low incomes and lower education levels were more likely to have taken this measure than their wealthier counterparts, Charlebois said.

About half of respondents opted not to purchase cauliflower at some point over the past year. Several months ago, cauliflower prices soared toward double digits a head thanks to a sliding loonie and drought in California. Some restaurateurs showcasing the cruciferous vegetable hiked prices or pulled the items from their menus.

More than 15 per cent of respondents also admitted to avoiding broccoli, lettuce, oranges and apples. Apples, for example, jumped 23.4 per cent in price from April 2015 to last April, according to Statistics Canada.

Tomatoes, cucumbers, bananas and carrots were snubbed in smaller numbers.

Many respondents -- about 45 per cent -- also considered buying or purchased frozen produce as a way to reduce their total grocery bill. Fewer of them -- about 17 per cent -- did the same with juice.

These cost-cutting measures may be something consumers will continue to do as produce prices don't show any signs of easing.

In the University of Guelph's 2016 food price report, Charlebois predicts this year's food inflation will outpace general inflation with vegetables increasing in price by two to four per cent and fruits by 2.5 to 4.5 per cent.

It's hard to say exactly how produce prices will play out in the future, he said, but produce price increases are unlikely to go away.

"Because of climate change, we are expecting vegetable and fruit prices to become much more volatile than they have ever been in recent decades," he said.