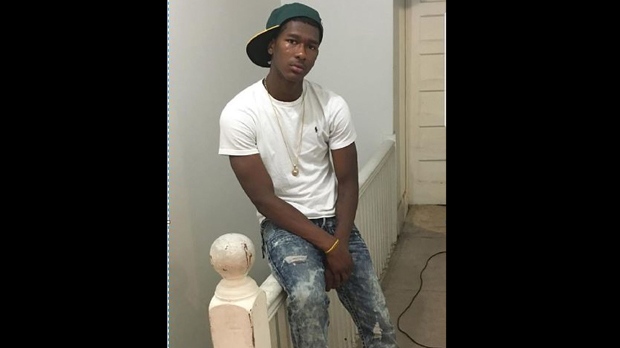 Devante Virgo is seen in a Toronto police handout image.

Toronto police released images of an 18-year-old suspect wanted in connection with what started as a routine traffic stop in North York earlier this month and ended in a foot chase.

On May 9, officers pulled a car over in the Sentinel Road and Finch Avenue West area after allegedly spotting an open liquor container in the vehicle.

They ordered three males out of the vehicle to conduct a search, where they allegedly found a bag containing drugs.

Police say one of the three men snatched the bag out of an officer’s hand and ran away, while the two other males also started to run away.

Officers chased the suspect who snatched the bag of drugs and observed him tossing an object. He was able to evade officers and escape. Officers searched the area and found a loaded Browning Hi-Power 9mm pistol.

Police caught up to the two other men and allegedly found a loaded Ruger .357 Magnum revolver during their arrest.

The two suspects taken into custody were identified by police as Amiin Mohamoud, 18, and Zarie Pitamba, 18, both of Toronto.

Each is facing a dozen charges relating to firearms possession and drugs possession.

Both appeared in court at Old City Hall on May 10.

The third outstanding suspect has been identified as 18-year-old Devante Virgo, who is also known as Little Bucky.

He is described as a black male standing five-feet-seven inches tall, weighing 140 pounds. He has a medium build, black hair and brown eyes. He has a tattoo on in his inner right forearm.