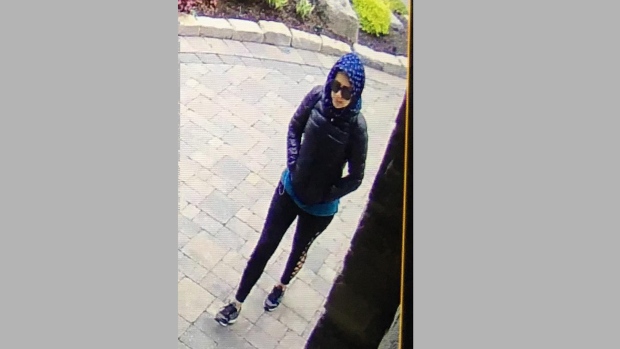 A woman is pictured at the front door of a home on Gorman Avenue in Vaughan in this surveillance image from Monday May 22, 2017. (debra.dibenedetto /Facebook)

York Regional Police are investigating a suspicious incident that led a Vaughan woman to believe that she was almost the victim of a break-in.

The incident took place at a home on Gorman Avenue in Woodbridge on May 22 at around 2 p.m.

Video of the encounter was captured on a home security system and uploaded to Facebook by resident Debra Cossaro Di Benedetto.

In the video, a woman in sunglasses and a headscarf approaches the front door of the home and rings the bell.

“She continued to ring the bell and each time would cover her mouth with the scarf and turn her back to the camera,” Di Benedetto said in her post.

Di Benedetto said she didn’t answer the door because she didn’t know the woman. However after three to five minutes, the woman remained at the front door and Di Benedetto finally asked her through the intercom why she was there.

The woman apparently said she was looking for a person called John.

In the footage, an older style Mercedes SUV can be seen slowly pulling up in front of the house as the woman looks out toward it. Two males then exit the vehicle with back packs, put on caps and make their way to the gate at the side of the home.

Di Benedetto said that footage from her neighbours’ camera showed the men trying to get through the side gate when they suddenly returned to the truck at the same time the woman at the front door left.

Di Benedetto said she believes that the woman was communicating with the men when she put the scarf up to her mouth and was alerting them when she believed the home was empty, and then again when she discovered that someone was home.

She also posted images and video of the encounter on Facebook and issued a warning to her neighbours to look out for suspicious activity.

A few hours later at 5 p.m. police received a call from a home on nearby Chatfield Drive. Police said the owners returned home to find that their home had been broken into, with several items stolen.

No arrests have been made and police say that so far, the people in the images shared by Di Benedetto are not officially suspects.

However officers are urging residents to stay alert and to call police if anyone suspicious approaches your front door.

A man makes his way around the side of a home on Gorman Avenue in Vaughan in this surveillance image from Monday May 22, 2017. (debra.dibenedetto /Facebook)

A man with a backpack makes his way around the side of a home on Gorman Avenue in Vaughan in this surveillance image from Monday May 22, 2017. (debra.dibenedetto /Facebook)