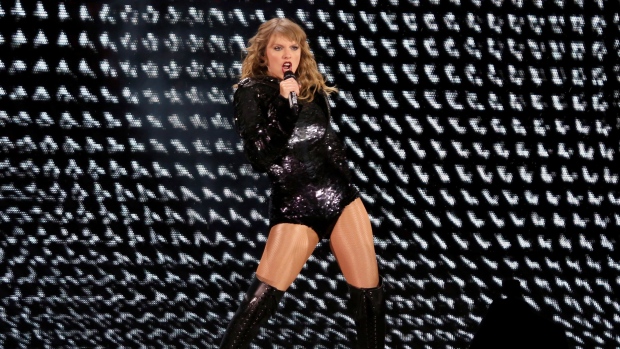 Taylor Swift performs onstage during the Reputation Stadium Tour at the Rose Bowl on Friday, May 18, 2018, in Pasadena, Calif. Step aside Ontario lawmakers, because Taylor Swift is giving you a lesson in how to deflect concert scalpers. THE CANADIAN PRESS/ Photo by Willy Sanjuan/Invision/AP

TORONTO -- Step aside Ontario lawmakers, because Taylor Swift is giving you a lesson in how to deflect concert scalpers.

As the province gets ready to introduce a new law on July 1 which puts a price cap on resales of live-event tickets, experts say it's the world-famous pop singer who's doing a better job squeezing out black-market opportunists.

Swift's team is undertaking an experiment that lists her tickets on Ticketmaster near prices they believe the market demands -- much higher than what it usually costs to see a stadium concert.

It's a competitive play aimed directly at pricing scalpers and online bots out of the business, and it could keep large quantities of tickets off the secondary market.

The bold move also helps Swift pocket a larger profit from face value tickets by attempting to eliminate a middleman that legislators have struggled to erase.

In Ontario, lawmakers have responded to calls for better regulations by introducing the Ticket Sales Act -- consumer protection rules that aim to ban tickets from being resold at more than 50 per cent above face value. Enforcement will mostly lean on consumers to file complaints.

Dean Budnick, author of "Ticket Masters: The Rise of the Concert Industry and How the Public Got Scalped," believes Ontario's law will become a labour-intensive affair that has a "negligible" impact on scalpers. What it doesn't account for, he said, is how it's nearly impossible to enforce laws on resellers who operate from outside the province or in foreign countries.

"It seems like a very simple approach to a very complex problem," Budnick added. "I don't ultimately believe that it can succeed."

The law comes as the Ontario government reacts to problems that compounded after it legalized ticket scalping three years ago.

Many Tragically Hip fans were left empty-handed for the band's 2016 farewell tour when venues sold out within minutes, leaving hundreds of tickets showing up on secondary market sites like StubHub and SeatGeek.

Pressure for lawmakers to respond took shape, though enforcement solutions weren't obvious. Some provinces and U.S. states have scalper bans in effect and they haven't necessarily prevented tickets from being resold at significantly higher prices.

That's why Swift's more aggressive swing at scalpers has a far better chance of making a dent in the black market, Budnick suggested.

On her "Reputation" world tour, which kicked off earlier this month, nosebleed seats started in the $60 range and went upwards of $1,300 each near the stage.

The skyhigh prices irked some fans, but it didn't seem to sway loyal Swifties from buying tickets. The performer has already doubled what made on sales during her 2015 tour, according to concert trade publication Pollstar.

While she hasn't sold out any of the venues, the singer appears to have found a way to keep scalpers at bay.

With prices closer to what scalpers list on the secondary market, it appears many who might have capitalized on a quick profit aren't willing to shoulder the financial risk of an unsold $1,000 ticket.

Swift isn't the only performer exploring ways to stomp out the scalpers.

Nine Inch Nails took a different approach when their upcoming tour went on sale over the weekend. Tickets were only available at each venue's box-office, shutting out bots entirely as fans hopped in line the old fashioned way.

Ticketmaster recently abandoned an anti-scalping ticket system criticized last May for leaving thousands of U2 fans standing in lines outside the Vancouver venue for hours. The credit-card based technology required concertgoers to present their card and identification at the door, which slowed down entry.

The company, owned by Live Nation, is attempting a different approach through its Verified Fan program, which is backing Swift's tour and other marquee artists, including Bruce Springsteen, Katy Perry and Ed Sheeran. The program requires fans to register long before the tickets go on sale in an effort to verify their authenticity.

Ticketmaster Canada chief operating officer Patti-Anne Tarlton said the rollout was deemed a success by the company when Springsteen launched his Broadway show last year. About three per cent of the tickets turned up on the secondary market.

"The idea is, we were able to predict the people who cherished that ticket and actually wanted to (attend) that event," she said.

But seats at Springsteen were priced on Ticketmaster similarly to Swift -- with two tiers of tickets topping out at $850 each. However, there's concern that the lavish prices could put off some fans who consider the move a cash grab.

At Swift's upcoming Toronto shows in August, the closest seats are in small supply on the secondary market. Less than 10 tickets were available in the standing area near the stage and each was listed for an asking price of $1,200 to $4,200 on reseller SeatGeek. Originally they sold for closer to $1,100 -- meaning many run afoul of the incoming Ontario law.

The business model is commonly used by hotels, airlines and ride-hailing apps to price their services against demand and the consumer's ability to pay that value. It could deal another blow to scalpers and the need for provincial laws.

Using current technology, promoters could easily list a block of seats at a high price and later discount the tickets if they don't sell, maximizing the profits before clearing out the inventory, Moore suggested.

"People involved in the live industry are leaving money on the table," she said. "And no industry wants to do that."