Trustees with the Toronto Catholic District School Board have voted not to ask the Ministry of Education to allow the board to delay the implementation of the province’s new sex-ed curriculum.

The vote was held as part of a meeting at the Catholic Education Centre Thursday night.

The motion, put forth by trustees Angela Kennedy and Garry Tanuan, was voted down 8-4 around 9:30 p.m.

In a news release sent out earlier Thursday, Kennedy and Tanuan said they would be introducing a motion asking fellow trustees to support the idea of a one-year delay.

“This is very personal and intimate material that we are asking educators to provide to our children. It is wrong for us to deny parents the opportunity to share with us what they think and that is why I am asking my Trustee colleagues to send a letter to the Ministry of Education requesting that we be allowed to delay implementation.”

The new curriculum, which is expected to be introduced at all Ontario school in the fall, has received substantial backlash from some parent groups who say the lessons contain information that is not age-appropriate.

However the province contends that the curriculum, which includes information on healthy relationships, consent, and cyber-bullying, is long overdue. 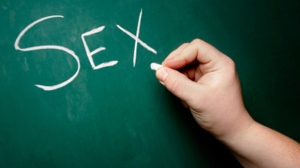 The Toronto Catholic District School Board logo is pictured above.