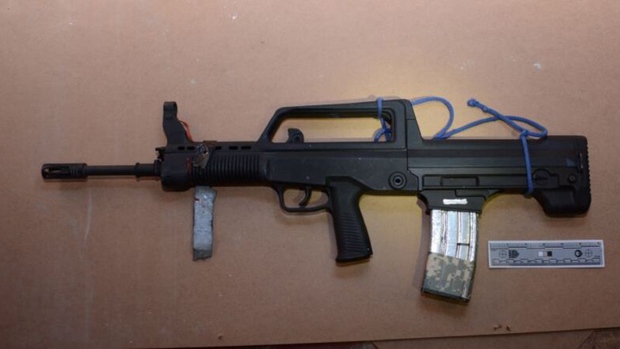 A Norinco QBZ-97 5.56mm bullpup rifle is seen in a handout image from TPS.

Two teenage boys have been charged and a semi-automatic rifle with an overcapacity magazine was seized after a food delivery driver was robbed at gunpoint in Scarborough last week.

On Nov. 4 at about 9:50 p.m., Toronto police say they were called to the corner of Ellesmere and Brimley roads for a report of a robbery.

Investigators said a food delivery driver was approached by a lone male suspect.

The suspect then allegedly drew a handgun and took the delivery person’s credit cards, cash, and the food he was delivering.

Centrefire rifles sold in Canada are prohibited from holding more than five rounds at a time.

A total of six people inside the home were arrested and charged.

The handgun allegedly used in the robbery was not recovered.

All six appeared in court at 1911 Eglinton Avenue East on Nov. 6.

The two adults charged were not identified as it could identify the four youths charged.

A 30-round magazine and 27 rounds of 5.56mm ammunition are shown in a TPS handout image.