The family of murdered Toronto woman Tess Richey is suing her killer, Toronto police, and a number of other parties for the “mental anguish and harm that they have needlessly suffered” following her death.

Christine Hermeston, Richey's mother, and the victim's four sisters are seeking $20 million in damages for the trauma they faced in relation to the 22-year-old's November 2017 murder.

“No amount of money can ever make up for the loss of Tess,” the family’s lawyer Michael Smitiuch said during a virtual news conference on Wednesday. “Through this lawsuit, Tess’s family seeks answers, accountability, and justice.”

Parties named in the lawsuit include 23-year-old Kalen Schlatter, the man convicted in Richey’s killing, the Toronto Police Services Board, Police Chief Mark Saunders, two Toronto police officers tasked with investigating Richey's disappearance, the owners of the bar Richey was at on the night she was murdered, the owners of the property where her body was eventually found, and the construction company hired to renovate that property.

None of the allegations have been proven in court and the defendants have not yet filed their statements of defence.

Richey was murdered hours after meeting Schlatter outside Crews & Tangos, a popular bar in the city's gay village, on the morning of Nov. 25, 2017.

During the trial, the Crown alleged that Schlatter stalked Richey after she left the bar that night and then strangled and sexually assaulted her after she refused to have sex with him.

Her lifeless body was discovered by her mother and a family friend at the bottom of an exterior stairwell of a building under renovation near Church on Dundonald streets four days after she was killed.

In the statement of claim, Richey’s family alleges that police were negligent and showed “reckless indifference” in their search for the 22-year-old after she was reported missing.

At Wednesday’s news conference, Smitiuch said if the police had “simply done their job,” Richey’s mother wouldn’t have been the one to find her daughter’s body.

“The images of what Christine saw that day are burned into her memory and no matter how hard she may try to forget what she saw, she cannot. The horrific images haunt her thoughts each and every day,” Smitiuch said.

Hermeston had travelled from her home in North Bay to Toronto following her daughter’s disappearance in an effort to help with the search.

The stairwell where she found her daughter’s body was located a short distance from where Richey was last seen on the night she went missing.

“Christine did what a police force over 5,000 strong could not do. She found her baby girl who had been murdered by a predator who left her in a stairwell. The sad reality is that the unimaginable harm inflicted on Christine by finding Tess's body need not, and should not have happened,” he added.

“For four days, Tess lay in a cold stairwell only 40 metres away from where the police were to search for her. This cannot and should not be acceptable police conduct.” 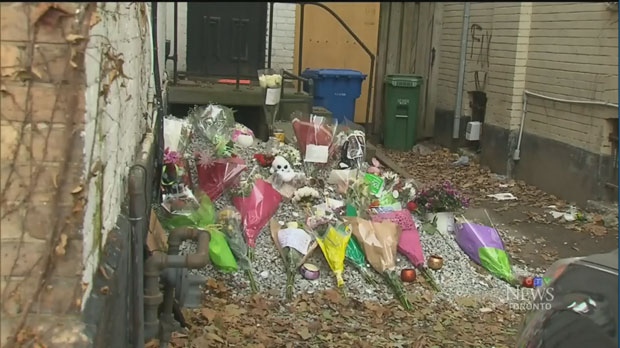 Const. Alan McCullough and Const. Michael Jones, the two Toronto police officers named in the lawsuit, are facing disciplinary charges of misconduct for allegedly failing to properly search for Richey.

Police did not warn public about predators, lawsuit alleges

The statement of claim also alleges that Toronto police caused mental distress to the family by falsely reporting that Richey was an escort and by claiming that she died by misadventure in the initial stages of the investigation.

Richey’s mother and sisters are also accusing the police service of failing to properly patrol the neighbourhood and warn the public about sexual predators and serial killers, including Bruce McArthur, who were active in the area at the time of Richey’s murder.

“Had there been more patrols and had there been a proper warning, this could have made a difference,” Smitiuch said.

In response to public outcry over the police service’s handling of missing persons cases in the city’s Church-Wellesley neighbourhood, the Toronto Police Services Board has ordered an external review to probe how Toronto police investigate disappearances.

In the lawsuit filed by Richey’s family, bar Crews & Tangos is accused of over-serving the 22-year-old on the night she was murdered, causing her to become “seriously and dangerously impaired.”

The family alleges that the owners of 580 Church Street, where Richey’s body was found, and the company carrying out renovations at the property failed to install lights to provide security and deter trespassers and other criminal activity.

Richey’s mother and sisters are also suing Schlatter, who is currently serving a life sentence for Richey’s murder, on the grounds that he “knew or ought to have known” that his conduct would cause the victim to suffer “humiliation, indignity, sexual, physical, emotional and mental distress, injury and death.”

“He is the one who made the decision to kill Tess and he is the one above all to blame for her death,” Smitiuch said.

Schlatter is currently in the process of appealing his conviction.

‘I’m not going to let anyone forget Tess’

Speaking to reporters at Wednesday’s news conference, Richey’s mother said she still has difficulty accepting that her daughter is gone.

“I don't believe that Tess is gone…. When I had to go to Toronto for hearings and stuff, I felt like I was still looking for her. One morning on the way to trial, I was sure that I saw her walking across at a crosswalk,” she said.

“Whoever the little girl was in the dark was built the same. She had her hair up in a sloppy bun like Tess wore. I was about to yell out.”

Hermeston told CP24 on Wednesday that following the death of her daughter, she "lives to die."

"You walk around and you find something to try to distract yourself with... all of sudden you remember what nightmare you're living. You just don't get past it," she said.

"It is something that we have to accept Tess is not coming home. There is no point in leaving on the outside light for Tess, though I do every night...I promised her she would never be in the dark again. They left her in the dark for four days down there."

She noted that money isn’t the main motivation for launching the lawsuit.

“I’m not going to let anyone forget Tess,” she said. “I hope that in the future that the same people on the force that let Tess (and) my family down will not make the same mistake twice with somebody else’s little girl.”