The Rogers Centre's facelift is in full swing. Here's what the stadium looks like right now

The Toronto Blue Jays are giving fans a peek inside the Rogers Centre, which is in the midst of its biggest ever renovation.

The team has also unveiled four “brand-new outfield neighbourhoods,” that will be ready for fans to enjoy when the Jays suit up for their home opener on April 11.

“Today’s announcement is part of the first phase of the multi-year renovations to Rogers Centre that will transform the stadium into a ballpark through a series of projects focused on modernizing the fan experience and building world-class player facilities,” the team said in a press release.

The “Corona Rooftop Patio,” opening in right field at the 500 level, will be a “rooftop patio oasis, nestled in Toronto’s iconic skyline.”

“Corona and the Blue Jays are bringing extra sunshine into the ballpark in this new rooftop patio oasis; situated beneath the CN Tower, fans become a part of Toronto’s skyline in the highest section of Rogers Centre’s iconic rooftop,” the team says.

The menu will feature the “full Corona family of products, plus frozen cocktails and modern takes on ballpark classics.”

“The Park Social,” opening in left field at the 500 level, will be a “park within the park for fans of all ages featuring games and comfortable places to hang out.”

The neighbourhood will be a “casual, open-air space where the best of Toronto’s parks are brought into the ballpark,” according to the team. 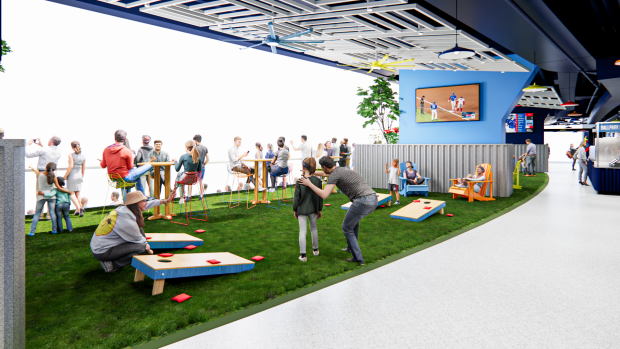 In addition to these new rooftop spaces, every 500 level seat is being replaced, for the first time since the stadium opened in 1989.

Footage provided by the team showed the building’s gutted interior.

Workers can be seen spreading concrete across large platforms, and positioning steal beams hoisted by cranes to the upper levels.

The two other new neighbourhoods are being created lower in the stadium, at the 100 level.

“The Stop,” center field behind the batter’s eye, is described as “your neighbourhood bar to grab a drink with friends before first pitch.”

“In an ode to stadium history, The Stop sits behind the batter’s eye in a space originally planned as a transit stop, showcasing the many different neighbourhoods in which Toronto’s transit system runs through,” the team says. 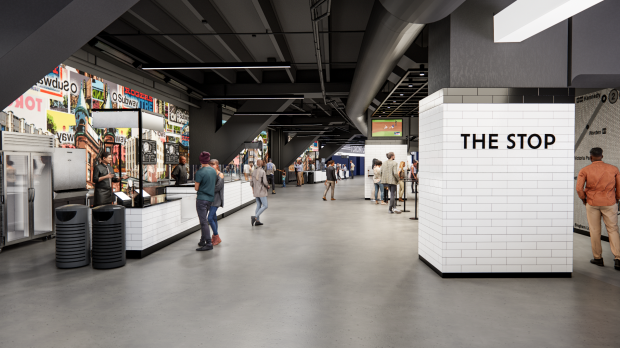 Lastly, “The Catch Bar” will be situated above the visitors’ bullpen, providing fans with “unprecedented views; the place to be seen and catch a home run.”

Its menu will feature “classic cocktails and trendy food bites, such as mac and cheese with Montreal smoked meat, Cuban sandwiches, and brioche pretzel bites.”

In addition to these four neighbourhood spaces, the Blue Jays are introducing renovated and new group spaces that will offer fans new event options for their next ballpark outing.

Spaces will be available to all ticketed fans when not reserved for a group.

The popular “WestJet Flight Deck,” located centre field at the 200 level, will be renovated to provide fans with a “brewery-style refresh with new food and drink options, such as BBQ brisket and jerk chicken nachos.”

“Fans can now host group events with varying capacities (50 to 300 fans) in parts of this fan-favourite space; the full WestJet Flight Deck will be available to all ticketed fans when not reserved by a group, while upper sections will remain open for most games,” the team says.

These projects are all set to be completed prior to the 2023 season, however the $300 million renovation project will continue over the next few off-seasons, with full completion of the project expected by 2025.

“Rogers Centre was conceptualized as a multi-purpose stadium when it opened in 1989 and has not undergone a large-scale renovation in its 33-year history,” the team says.

“The scope of this project addresses the most important challenges with the current stadium, while not rushing the necessary long-term work to maintain the ballpark for future generations of fans.”