“I’m contemplating whether I will go to the police on this,” Thomson said in a live interview on CP24 Monday afternoon. “There’s still more family I have to speak to. I have to decide what to do. I’ve been told I have time.”

Thomson also reiterated she believes Ford was intoxicated during the event Thursday night.

Thomson said she spoke over the weekend with others who had been at the event and they agreed with her assessment Ford was behaving strangely. But she said many of them are reluctant to speak up for fear of being harassed.

““I had a lot of hate sent at me,” Thomson said, referring to a barrage of angry messages posted on her Facebook account since she made her claims.

Thomson made the comment to CP24 the day after Ford repeated his unequivocal denial of Thomson’s allegations on his radio show.

Ford said he was tired of “wasting time” on the matter during the weekly show on Newstalk1010 but Thomson continued the war of words Monday during interviews with the press, telling the Roz and Mocha morning show on Kiss 92.5 that the mayor have been under the influence of cocaine at the time of the alleged incident.

“As the story unfolds, and it always does with him, people will be more honest,” Thomson said. “There are people out there that I talked to over the weekend that said ‘Yes, we saw that he was intoxicated and we feel for you.’ I am hopeful those people will come out and say what they saw at the event.”

Thomson, who ran for mayor against Ford in 2010 and is rumoured to be a potential candidate in the next municipal election, has suggested that Ford made a suggestive comment to her before grabbing her buttocks as the pair posed for a photo at an annual event put on by the Canadian Jewish Public Affairs Committee Thursday night.

“When people want to make up stories, that’s their prerogative," Ford said during the radio show on Newstalk1010 Sunday.

Thomson has previously said that she would not look to press charges in connection with the alleged incident and is just looking for an apology.

Speaking with CP24 Monday, Thomson said she is not surprised that apology has not been made.

“He is a powerful man that has just been brought out in public so naturally he is going to overreact,” she said.

Two Richmond Hill councillors then told CP24 that Thompson told them about the alleged incident while at the event Thursday night before asking a friend to approach the mayor in an effort to get him to touch her inappropriately and capture the moment on camera. 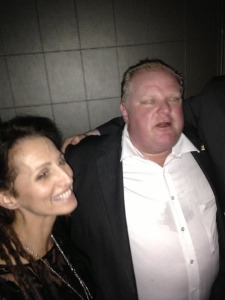 A photo taken from Facebook shows Sarah Thomson and Rob Ford together at an event hosted by the Canadian Jewish Political Affairs Committee on March 7, 2013. Thomson is accusing Ford of touching her inappropriately during the event. (Facebook)