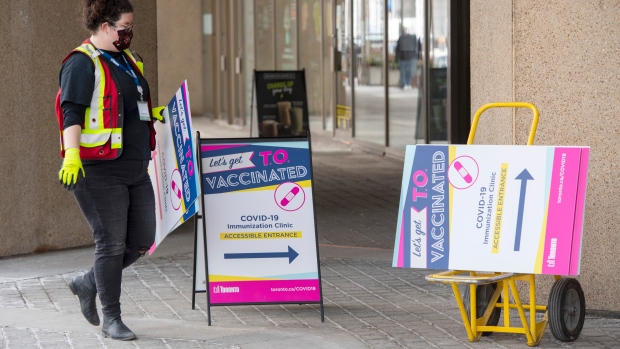 A worker sets up signs for a mass vaccination clinic in Toronto on Wednesday, March 17, 2021. THE CANADIAN PRESS/Frank Gunn

The city is urging people to fill up the thousands of appointments that are still available at city-run mass immunization sites as two more clinics opened in Toronto on Monday.

People born in 1951 or earlier are currently eligible to book an appointment to receive their first dose of a COVID-19 vaccine at one of the city’s five mass immunization clinics, including the Mitchell Field Arena in North York and the Malvern Recreation Centre, two clinics that officially opened on Monday.

According to city staff, as of 1 p.m. today, there were still 7,000 time slots available across all sites between now and Friday.

“We continue to urge people who are over the age of 70... to book their vaccine appointment,” Mayor John Tory said on Monday afternoon.

“There is no time like the present to get this protection at a time when the variants are posing a renewed threat.”

Toronto Fire Chief Matthew Pegg, who serves as the general manager of emergency management for the city, said while some clinics are fully booked for the next several days, other sites, including the Metro Toronto Convention Centre and the Toronto Congress Centre, have spaces available every day this week.

“Our immunization task force is continuing to identify viable options to ensure that every available COVID-19 vaccine dose is administered each week,” Pegg said at a news conference on Monday.

Vaccine appointments for the city-run facilities are booked on the province’s appointment portal, which Pegg said does not yet have the functionality to support a standby list. Pegg said when there is a lull in appointments, unused vaccine is either carried over to the next day’s inventory or re-allocated to one of the city’s health-care partner clinics.

In addition to the city-run clinics, several Toronto hospitals are administering COVID-19 vaccines to priority groups and select pharmacies are using the AstraZeneca vaccine to inoculate people ages 60 and older.

Pegg said his team and staff at Toronto Public Health are watching what happens on the province’s booking system “on an hourly basis every single day” to monitor how many appointments are being booked at the city’s clinics.

“At the point where the number of bookings starts to fall off and if we get to the point where we are seeing fewer and fewer appointments being booked over consecutive days, while there are still appointments available in the system, that is an automatic trigger that comes to our immunization task force command team and that initiates conversation with the medical professionals,” he said.

Ultimately, he said the province determines who is eligible to receive a vaccination and it is not up to the city to adjust the eligibility criteria to allow younger members of the population to fill up appointments.

“Of course supply has been one of the key issues over the past several weeks. We remain hopeful that those challenges will alleviate and no longer be so much a part of the conversation,” she said at city hall this afternoon.

On Monday, Tory, along with other mayors in the Greater Toronto and Hamilton Area (GTHA), urged the provincial and federal governments to supply hot spot regions with a greater number of doses.

Currently, vaccine allocations for municipalities are determined by population.

“This is a national effort to defeat this virus and I am perfectly understanding and supportive of the need perhaps to have say a hot spot in B.C. or perhaps one in Quebec given an extra allocation, an extraordinary allocation, of vaccine if that’s where there are hot spots,” Tory said.

“We are saying as a region, as one, 11 municipalities, this is a hot spot and we believe that accordingly, an extra amount of the firepower that we have to allocate against this enemy that is the virus, should be allocated to a place where it is needed in order to fight something that is more prevalent here than it might be elsewhere.”