A Toronto-based cannabis coalition is calling on the city to "drop all charges" laid as a result of last week’s pot shop raids.

“When compared with mail order or the black market, dispensaries in Toronto provide a safe, informative environment where patients can source high-quality medical cannabis,” Gonzalez said.

“Dispensaries are far safer from a public health perspective than the black market, and patients should have a choice where and how they obtain the medical cannabis they need.”

Police say 90 people were arrested and close to 200 charges were laid after officers raided 43 marijuana dispensaries across Toronto on Thursday afternoon.

Some of the charges include possession for the purpose of trafficking and possession of proceeds obtained by crime.

As part of the pot dispensary investigation, dubbed ‘Project Claudia,’ police seized 269 kilos of dried cannabis, 71 kilos of chocolate edibles, 129 kilos of candy edibles, 64 kilos of sodas and liquids and nearly $160,000 in cash.

Speaking to reporters at city hall Monday, Gonzalez said the city needs to own up to its “major mistake.”

“They are ruining the lives of people that have families, that have futures in front of them. They need to realize that they have made an unbalanced response to this situation,” he said.

“They really need to look to other municipalities to see how regulation has taken effect in other market places without need for this kind of action.”

One day after the raids, Toronto Police Chief Mark Saunders told reporters the shops posed a “genuine health concern” for members of the public.

“There is no regulatory process behind this,” he said.

“These locations cannot tell you where it is coming from nor what the actual content is.”

There are an estimated 88 pot dispensaries in Toronto, however, there are only 18 producers in the province that are licensed by Health Canada to sell medical marijuana.

On April 20, Ottawa said it would seek to introduce legislation in 2017 to legalize marijuana for all Canadians but the details of those regulations are not clear.

“If a dispensary is up and running it is unlawful unless they have a licence from Health Canada,” Saunders added.

“We have to have an environment where it is regulated properly by the government so that there is a standard.”

But Gonzalez says a lack of clear regulations is part of the reason these dispensaries opened in the first place.

“Multiple court decisions federally and provincially have affirmed the rights of Canadians to have reasonable access to medical marijuana in this country. For most Canadians, dispensaries are the only reasonable point of access to lab-tested, standardized products not currently available from other sources. As such, medical cannabis dispensaries arose because of market demand and because of a lack of regulations,” Gonzalez said in the written statement released Monday.

He added that the coalition is asking that Toronto city council and relevant bodies look at bringing in “reasonable” and “appropriate” regulations that would allow the medical cannabis industry to operate in the city.

Despite last week’s raids, it appears some shops are keeping their doors open.

“We refuse to be bullied by the police and unjust, harmful, discriminatory law enforcement,” she wrote. 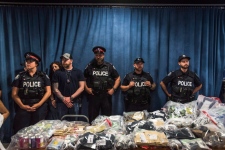 Police officers look on as marijuana products, including edibles and oils, which were confiscated by toronto Police are displayed during a press conference to discuss results of a series of police raids conducted on companies allegedly selling marijuana illegally, dubbed Project Claudia, in Toronto on Friday, May 27, 2016. (The Canadian Press/Aaron Vincent Elkaim)