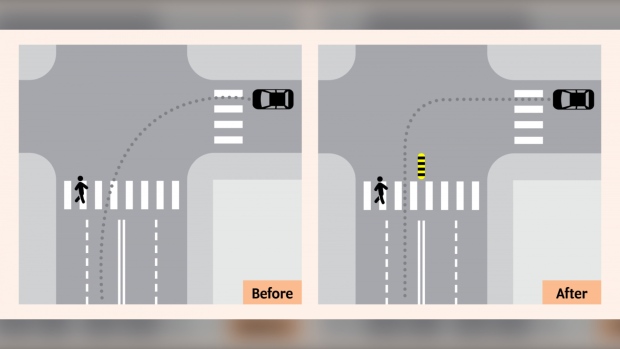 This before and after image provided by the City of Toronto shows a new traffic calming pilot project.

Toronto is installing centreline speed bumps at select intersections as it aims to cut down on collisions that result from drivers making high-speed left turns.

The city says that the rubber speed bumps are being installed at eight intersections with the goal of encouraging drivers “to approach the crosswalk at a sharper angle instead of cutting across intersections diagonally,” thereby resulting in reduced speeds.

“We are continuing to make progress in expanding our Vision Zero toolbox by adding proactive and targeted solutions with the purpose of eliminating traffic-related serious injuries and fatalities. The Left-Turn Calming Pilot is one of these solutions that I’m confident will ultimately protect people walking and cycling by making them more visible to turning vehicles,” Mayor John Tory said in a press release. “I look forward to seeing the results of this pilot so we can determine if this measure should be expanded to other locations across the city."

The locations for the new centreline speed bumps have been chosen based on collision history and severity.

Two were installed in July and the remaining ones will be installed by the end of August.