The Danforth community came together Thursday evening for a commemoration ceremony to mark the third anniversary of the mass shooting on the Danforth that left two people dead and more than a dozen injured.

People gathered at Withrow Park and placed flowers under two trees that were planted in honour of 10-year-old Juliana Kozis and 18-year-old Reese Fallon. 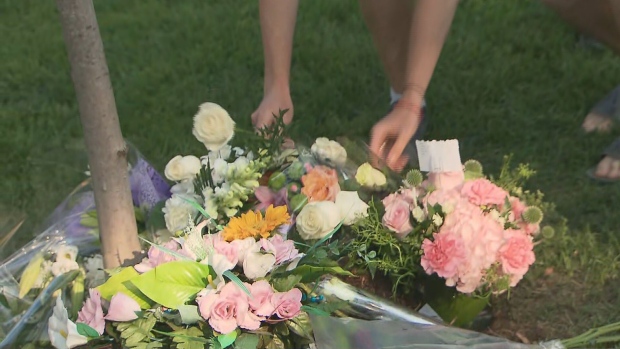 They were killed on the night of July 22, 2018, when a gunman opened fire at people sitting on restaurant patios and walking along Danforth Avenue in the heart of Greektown.

After a short exchange of gunfire with two responding officers, the shooter, 29-year-old Faisal Hussain, was found dead from a self-inflicted gunshot wound on a side street near Logan and Danforth avenues.

The shooting also wounded 13 others.

Mayor John Tory attended the ceremony and said the shooting "tore at the very fabric of a city that considered itself safe."

"I think it really may be steeled the resolve of Torontonians, to say, well, we're going to work harder to keep a safe city, to address mental health issues, to address gun-related issues in terms of the prevalence of guns even here where we have pretty strict gun control," the mayor said.

Thursday's ceremony was subdued at the request of the victims' families. Tory said healing continues for all of those impacted by the shooting.

"Three years later, for those families, it is not going to be anywhere near enough to have the healing be complete. And so, we're here now just to lay a flower and just have a quiet remembrance," Tory said. 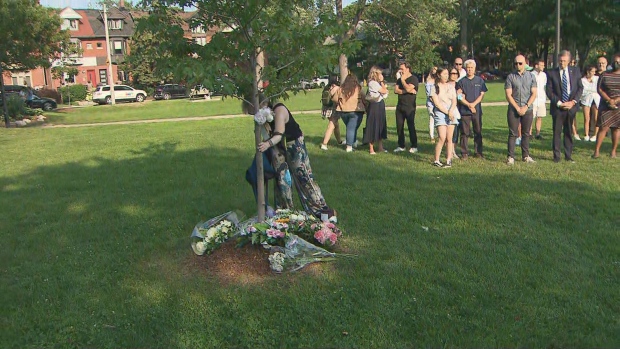 Ken Price, whose daughter, Samantha, was injured in the shooting, said the ceremony was extremely emotional.

"It was nice that the city did something to bring us together. It was hard to do," Price said. "I think it's also amazing how quickly time has gone by. The three years -- it feels like it was just happening."

He said that her daughter had been able to overcome her injuries.

"She's been able to go on to university … and to move on somewhat. But you know, it's not something you ever overcome completely. It's something you live with," Price said.

Since the shooting, Price and other families have created the group Danforth Families for Safe Communities that advocates for stricter gun control in Canada.

Price said the group will continue to raise the issue until changes are made.

"This is a long debate in this country. For some reason, guns bring out all kinds of emotions," he said. "This is an issue that needs to be solved on a national basis."

"So, we urge the government to act, and we hope they will."

Ali Demircan, who was injured in the shooting, was having coffee with friends when the gunfire started.

Speaking to CP24 on Thursday, he said he tried to help Reese Fallon after the shots rang out.

“It was a nightmare,” he said of the devastation that unfolded on that day.

“Three years (have) past and every single second (is) still in our memories.”

Julie Dabrusin, the Member of Parliament for Toronto-Danforth, said in addition to remembering the victims, the community will also use the anniversary to acknowledge the bravery of people in the community who came together to assist victims during the shooting.

“Today is a big day for our community. It is a very emotional day, a day when we remember a really difficult time we had, the people we lost, the people who were injured. But also the strength. You saw Danforth Strong,” she said.

The Toronto sign in Nathan Phillips Square was dimmed in honour of the victims.

On July 22, 2018, two lives were taken in a senseless act of violence on the Danforth - one that I and so many others will never forget. We remember Julianna and Reese and thank those who responded to this tragic incident. @Toronto_Fire @TorontoPolice @TorontoMedics