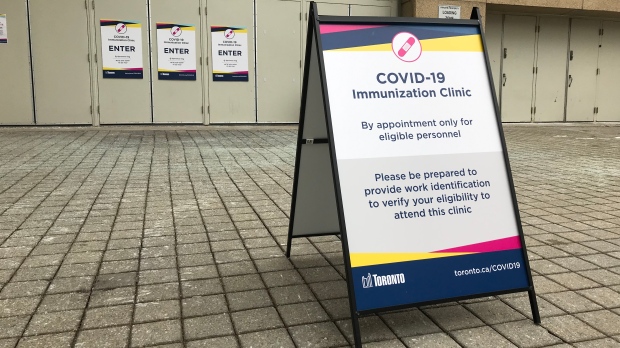 A sign is shown outside a mass vaccination clinic at the Metro Toronto Convention Centre on Monday. (Craig Wadman)

The City of Toronto has opened up a block of 3,500 new COVID-19 vaccination appointments for next week.

The additional appointments were made available on Thursday afternoon, one day after Fire Chief Matthew Pegg revealed that the number of slots still open at most city-run clinics over the next month was “in the tens.”

The city says that 2,430 of the new appointments will be made available at the Malvern Community Recreation Centre Clinic in Scarborough.

That clinic was initially supposed to suspend operations for two days next week for planned infrastructure work but will now remain open while that work takes place.

The remaining 1,000 new appointments, meanwhile, will be offered at the Metro Toronto Convention Centre clinic.

“I want to thank our Immunization Task Force and Toronto Public Health teams for working to find a way to keep the Malvern Clinic up and running next week while still getting emergency repair work done outside. This will help ensure hundreds more people can get vaccinated in Scarborough next week on top of the thousands of other appointments already booked,” Mayor John Tory said in a press release.

Approximately 223,000 people have booked appointments at city-run vaccination clinics in Toronto since eligibility was expanded to include all adults in hot spot postal codes on Monday morning.

It is unclear whether the city plans to open additional blocks of appointments when eligibility is widened to include adults 40 and up as of Monday.

“We are opening every single appointment that is available on a one to one basis with the amount of vaccine we have to administer. So there really is no other secret formula, other than having more vaccine that can be made available and in the event and in the time when more and more vaccine is made available we have capacity in our clinic system to do more every day and every week,” Pegg said.

Meanwhile, Dr. Eileen de Villa, the city's medical officer of health, got her first dose of the vaccine on Thursday.

"You may not be able to tell, but I have a huge smile under that mask," de Villa tweeted Thursday evening. "I just received my first dose of vaccine this evening at the Cloverdale TO immunization clinic."

You may not be able to tell, but I have a huge smile under that mask. I just received my first dose of vaccine this evening at the Cloverdale TO immunization clinic. #GotMyVax #GotMyShot pic.twitter.com/yiNfyfyL7O