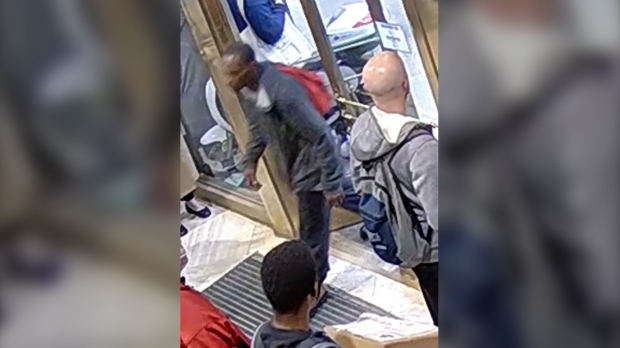 The suspect can be seen above. (Toronto Police)

Toronto police are looking to identity a man after he allegedly assaulted a victim in a wheelchair last month.

The incident occurred just before 5:45 p.m. on April 25 when a man entered a building in the Yonge and College Streets area of Toronto, according to Toronto Police Service (TPS).

Investigators allege that the man then approached a person in a wheelchair and punched the victim in the face with a closed fist.

Police said the assault was unprovoked and that the assailant is not known to the victim.

The suspect was last seen walking southbound on Yonge Street, then westbound on Gerrard Street, a news release issued on the attack said.

Police are describing the suspect as between 25 and 35-years-old, with dark skin and short dark hair.

He was last seen wearing a grey long sleeve shirt, blue jeans, construction style boots and had a red backpack.

Police are asking anyone with information pertaining to the case to contact them at 416-808-5200.