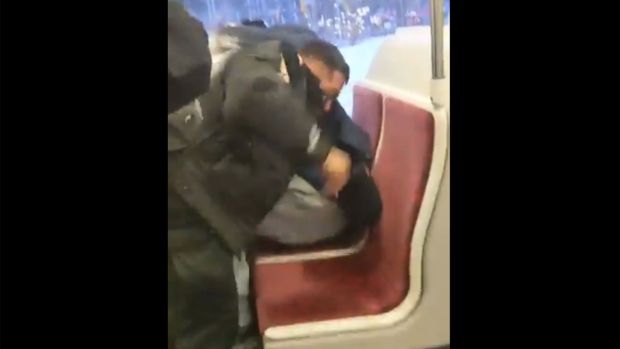 Toronto’s ombudsman is calling on the TTC to “overhaul” how it oversees its special constables and fare enforcement officers following a violent altercation on a streetcar last winter.

The incident happened on a 501 streetcar on the morning of February 7 as two officers asked a rider for proof of payment.

A short video clip of the altercation, which was posted online, showed the officers subduing the man. One of them can be seeing pinning him against a seat while the other sprayed him with a substance, later determined to be pepper spray.

In the wake of the incident the TTC retained a legal firm that conducts workplace investigations to review the actions of the officers.

In a report that was released on Friday, the firm concluded that the officers’ use was "unnecessary" and “discriminatory” given that it was based on their assumption of the passenger's mental health.

They also took issue with the decision by another fare enforcement officer to press two of fingers against the base of the man's neck for about 35 seconds, deeming it “unnecessary” and not "consistent with her training"

The report made several recommendations, including additional training regarding mental health and more clarity regarding fare inspectors' use of force.

But in a blistering open letter sent to the TTC board on Monday, Ombudsman Susan Opler said that further action needs to be taken to restore public trust.

In it, she expressed her “deep disappointment that the report “once again raises many issues” that her office has already identified in the aftermath of other violent altercations between TTC special constables, fare enforcement officers and members of the public.

She said that she is also concerned that “TTC management would have done nothing” had the incident “not come to the public’s attention through social media” or had her office not intervened a short time later.

“The TTC is the pride of Toronto, but Toronto deserves better than this. The evidence is clear: the TTC must move ahead with determination and without further delay to overhaul its oversight of Special Constables and Fare Inspectors, by changing the culture underlying them from one of para-military enforcement and compliance to one based on rider security, service, respect and dignity,” she said. “Public trust – and therefore the TTC’s success – depends on it.”

In her letter Opler, detailed several other altercations between special constables, fare enforcements officers and members of the public in recent years, including one involving a young black man on a St.Clair streetcar in 2018 and another that involved a woman in mental distress at Dundas Station in 2019.

She said that over the years she has repeatedly expressed concerns about “violent interactions between (TTC) employees and members of the public” and that “all too often” the incidents involve passengers who are “are marginalized members of our community.”

The time for change, she said, is now.

“Overall, I remain convinced that management must move more quickly to change the culture of the TTC’s special constables and fare inspectors, and to improve its oversight of them. Special constables and fare inspectors have difficult jobs, to be sure. Most days, they do their jobs with care and professionalism, in a way that the TTC and the public should appreciate and admire,” she said. “But each time one of these violent encounters with the public occurs and it becomes clear – as it did once again in this most recent case – that TTC staff could and should have de-escalated the situation, but instead they escalated it, public trust is eroded.”

The report, which will be considered by the TTC board this week, found that the passenger "aggressively refused" to provide proof of payment when asked and that the officers initially remained calm, did not raise their voices and did not violate any TTC policies.

But it said that they were wrong to use force to detain the man when he stood up, especially given that he was attempting to exit the street and was not advised that he was under arrest, nor did he display threatening behaviour.

In her letter, Opler said that she did meet with TTC management earlier this month and believes “that they want to do the right thing by the public.”

She said that she asked that they publicly release TTC surveillance camera footage of the incident and take “immediate steps” to have the passengers criminal conviction on two counts of assaulting a peace officer vacated or overturned.

“Fairness demands this, given that the convictions were premised on the TTC staff’s version of the facts (namely that Passenger 1 started the fight), which the independent investigation found to be untrue,” she said.