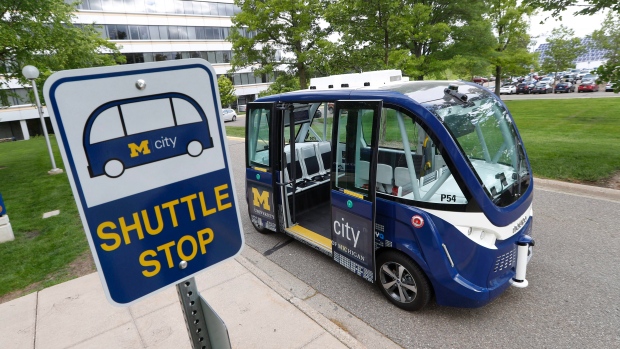 In this June 4, 2018, photo, an Mcity driverless shuttle makes a stop on the University of Michigan in Ann Arbor, Mich. Dozens of self-driving shuttles made by French autonomous vehicle company Navya are now ferrying passengers at hospitals, airports and public roads worldwide. Last week the University of Michigan began running two of its shuttles on a part of its campus. (AP Photo/Paul Sancya)

A driverless shuttle could soon serve as a missing link for many residents who do not have easy access to rapid transit.

According to a report that will go before the public works committee next week, the city is planning to experiment with autonomous vehicle technology by launching a pilot project for the operation of a driverless shuttle sometime in 2020.

According to the report, the shuttle would aim to “solve the first-mile/last-mile challenge,” wherein many residents don’t use public transit because they live too far away from rapid transit stations.

The vehicle would accommodate 8 to 12 riders at a time.

“A lot of people are discouraged right now from taking public transit because it is too far from where they are to get to public transit. This is meant to be a shuttle that will, in some way, move people between where they live and work and public transit and in that regard I think it will reduce the number of cars on the road,” Mayor John Tory told reporters on Tuesday. “I think it is a positive initiative but it is meant to be a pilot. We have to learn about these things, it is developing technology, and we will do the best we can to learn as fast as we can and make Toronto a leader.”

Project to be partly paid for by feds

The planned pilot project came about after the city applied for funding through a Transport Canada fund and was granted $365,000 to help pay for the research and piloting of an automated shuttle service.

While the route that the shuttle will travel has not yet been determined, the report says that it is anticipated that it will serve at least one TTC or GO Transit station within Toronto’s boundaries and will operate in a “relatively low-speed, low-volume mixed traffic environment.”

The report also says that the shuttles will be staffed with a paid TTC or Metrolinx staff person who will act as an ambassador, though the vehicles themselves will operate at a high level of automation.

“The intention of the pilot is to fill an existing gap within the public transit system, such as linking two transfer points or solving the first-mile/last-mile challenge. It will not replace conventional service,” the report says.

The total cost of the pilot project is estimated at $1.135 million, $365,000 of which will be covered by the federal grant. The City of Toronto, meanwhile, will pay $60,000 for the one-year lease of the autonomous vehicle and another $224,100 in in-kind contributions. The TTC and Metrolinx will also chip in $252,000 each, largely in the form of providing staff members to occupy the vehicles. .

Speaking with reporters, Tory called the pilot project “very exciting” but he also said that it will be essential to ensure that autonomous vehicle technology is used safely.

“This will move us forward in terms of learning about this technology and how it can be used while making sure it is safe and making sure we using it in the right kind of places at the right times,” he said.

The public works committee is expected to debate the proposed pilot project on Tuesday.