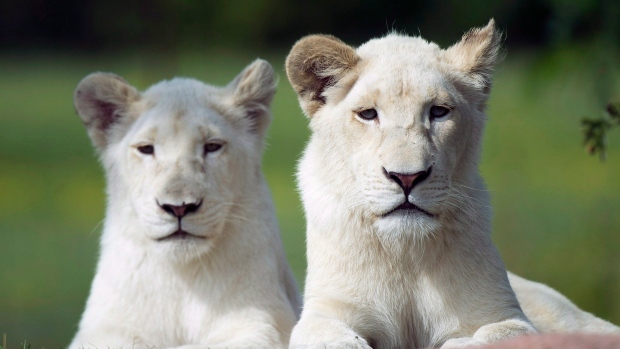 White African lion female cubs Makaili, left, and Lemon rest in the heat at the Toronto Zoo after their names were announced in Toronto on Thursday, August 2, 2012. THE CANADIAN PRESS/Nathan Denette

Toronto Zoo visitors will soon be able to see the animals from the comfort of their vehicles.

The zoo confirmed Wednesday night that it has developed an “innovative new interim plan” to offer a safe drive-thru experience that meets the province’s reopening requirements.

“The pre-booked driving route would allow guests to see the Zoo’s animals from the comfort and safety of their own vehicle along a 3.4 kilometres route,” the zoo said in a statement.

The public will be able to pre-purchase tickets online once it gets approval to reopen, the zoo said.

The zoo, located near Meadowvale Road and Old Finch Avenue, north of Sheppard Avenue East, has been closed since March 14 due to the COVID-19 crisis.

It has taken a financial hit due to the closure. In April, the zoo laid off 118 non-permanent employees and paused summer hiring.

The zoo also launched a campaign last month to raise money to buy food for its more than 5,000 animals.

The campaign raised over $500,000, which is enough to cover six months of food costs, the zoo said.

The zoo welcomed two new members of its family this month – a baby Madagascar spider tortoise, which hatched on May 2, and a Masai giraffe that was born on Tuesday.