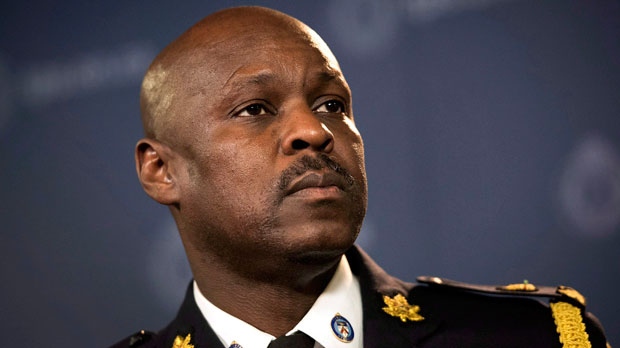 Mark Saunders, the Toronto Police chief designate, speaks to reporters while being introduced at a press conference in Toronto on Monday, April 20, 2015. THE CANADIAN PRESS/Darren Calabrese

Sixty per cent of Torontonians from all walks of life told a Forum poll that they want the Toronto Police practice of “carding” — stopping an individual to collect information without reason to believe they committed a crime — to end.

Only 29 per cent of the 822 Toronto residents asked said they supported the practice, and close to 80 per cent of 18-34 year-olds said they oppose it. Slightly more than half of respondents indicated they thought carding was ineffective at preventing crime.

The poll also found that 22 per cent of respondents had been stopped themselves and were “asked for their personal information even though they were not committing an offence.”

Opposition to carding seems to transcend socio-demographic lines, with the poll finding more than 50 per cent opposition to the practice in every part of the city, in every demographic other than 45-54, and all household income categories.

Last month, the Toronto Police Services Board scaled back reforms to carding requested by civil rights and community advocates.

Opponents of carding, supported by statistics, say racial minorities are disproportionately more likely to be “carded” by police.

Only 30 per cent of respondents to the poll said they found acting Toronto Police Chief Mark Saunders’ statement that ending carding would increase the crime rate “credible.”

More than 40 per cent said Saunders’ statement was “not credible,” while 26 per cent of respondents had no opinion.