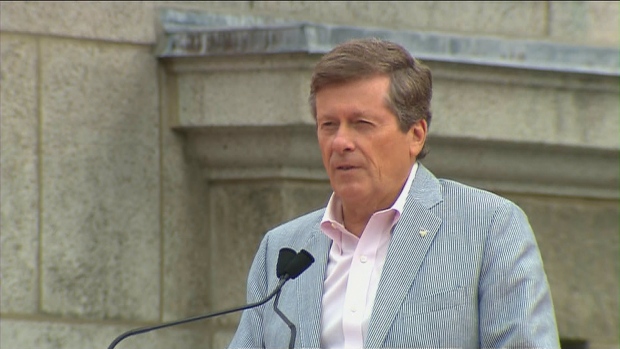 Mayor John Tory speaks at the opening ceremonies of the Canadian National Exhibition on Friday, Aug. 21.

Mayor John Tory is refusing to say whether or not he would seek the formal approval of council before submitting a letter to the International Olympic Committee expressing interest in a potential bid on the 2024 Summer Games.

Tory has been openly floating the possibility of going after the 2024 Olympics since the Pam American Games kicked off in July but with a Sept. 15 deadline to submit a written expression of interest looming he is quickly running out of time.

Appearing at the opening ceremony for the Canadian National Exhibition on Friday, Tory was asked whether he would bring the Olympic issue to council for a vote before deciding whether or not to submit an expression of interest but he did not directly answer the question, instead reaffirming his commitment to seek the approval of council for any formal bid.

The next scheduled council meeting will not take place until Sept. 30, two weeks after the IOC deadline has passed.

“Let’s start with what we do on Sept. 15, which is a letter that indicates an interest in bidding. There is then a process that unfolds that actually consists of documents that form part of a bid,” Tory said. “I think what we are doing at the moment is consulting and collecting information on whether to take that first step of saying ‘Yes, we are interested in bidding.’ As I have said, before any formal bid is launched city council will approve of it.”

Last week, Tory met with Canadian Olympic Committee (COC) president Marcel Aubut to discuss a potential bid but later said that he was still “nowhere near” making a decision on whether to bid on the games.

Discussing his ongoing due diligence on Friday, Tory said he is “engaged in detailed consultations” with members of council as well as other members of the community on the Olympic issue.

The mayor then added that he would informally seek the support of the federal and provincial governments before signing off on any Olympic bid.

“They are essential parts of this,” he said.

According to IOC rules, the expression of interest has to be accompanied by a $150,000 deposit, however in Toronto’s case the COC has agreed to cover that cost.

So far Budapest, Hamburg, Paris and Rome are bidding to host the 2024 games.