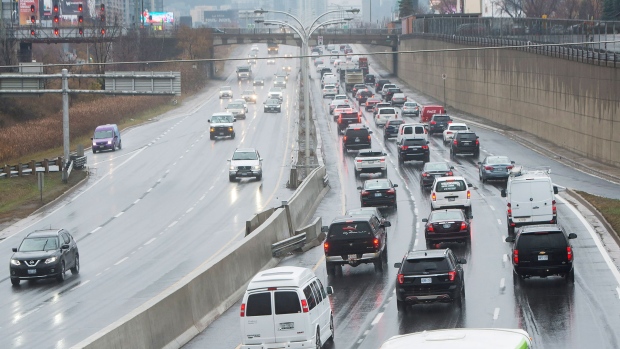 Vehicles makes there way into and out of downtown Toronto along the Gardiner Expressway in Toronto on Thursday, November 24, 2016. THE CANADIAN PRESS/Nathan Denette

A $1 billion increase in the budget for the rehabilitation of the Gardiner Expressway will not eat into the proceeds from proposed road tolls along the Gardiner and the Don Valley Parkway, Mayor John Tory says.

A staff report that was released on Thursday morning revealed that the budget for the rehabilitation of the highway has risen from $2.57 billion in September, 2015 to $3.637 billion as of this August but in an interview with CP24 on Friday morning Tory promised that the increase won’t cut into the revenue from potential road tolls that could raise $166 million annually for needed infrastructure projects.

The $2 flat-rate tolls, which were endorsed by Tory on Thursday, still need to be approved by city council. The provincial government would also have to make a legislative change to the City of Toronto Act to allow the tolls.

“The fact of the matter is that the money to pay for a large part of the Gardiner replacement, which has to be done - that expressway is at the end of its life - most of that was provided for in city’s capital budget in next 10 years,” Tory said. “Money from tolls is new money that is going to come in. Most of that will be available for transit but it was also described by me as being available for road repairs as well. That’s why it is important that we establish the principal that those who use the road, including those who don’t live in Toronto, should help in small way with paying for it.”

The staff report attributed most of the increase to the budget for the Gardiner to the lack of federal funding. It said that the city’s initial math assumed that the project would be eligible for up to $820 million in federal infrastructure dollars, however the federal government has to date given no indication that they will come to the table.

The staff report also pointed out that the province has not indicated a willingness to provide funding at this point, citing its priority to instead invest “approximately $15 billion over ten years in regional transit projects.”

As a result of the budget increase, the staff report says the city will face a shortfall of $984 million between 2018 and 2022.

It should be noted that Tory has said that the road tolls along the DVP and the Gardiner could not go into effect until 2019 at the earliest.