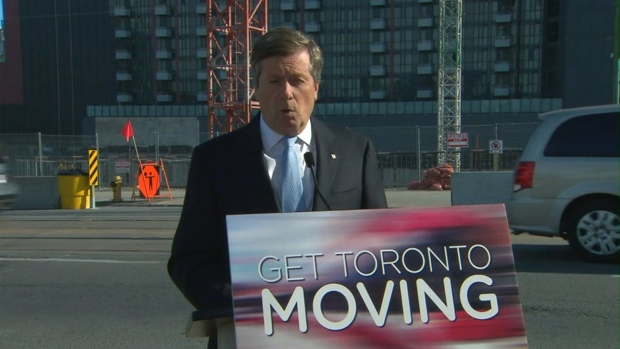 Mayor John Tory speaks with reporters near a construction site at Bathurst and Front streets on Tuesday.

The city will no longer be issuing a “rubber stamp” for applications from developers who want to close streets for an extended period of time, Mayor John Tory says.

Tory held a news conference near the intersection of Bathurst and Front streets on Tuesday to deliver a warning to developers who are intent on closing lanes of traffic in order to create staging areas for construction vehicles and equipment.

“The status quo is not satisfactory. It is not going to be business as usual going forward,” Tory said. “It is time we started to place a greater emphasis on the broader public interest when it comes to these kinds of decisions.”

Last week, city council ignored a recommendation from staff and chose to put on hold three applications from developers who wanted to close downtown streets for multiple years.

In the wake of that decision, Tory said that one of the developers agreed to amend their request in order to take up only a “small part of a curb lane” while allowing two lanes of traffic to pass.

The other two proposals, meanwhile, have been sent back to city staff in the hopes that they will be able to get developers to agree to similar modifications, Tory said.

“I want it to be understood very clearly that the council approval of these kind of things going forward is not going to be a rubber stamp,” Tory said. “It never should have been but now we have established the precedent and we will be going forward looking at each of these very carefully and making sure people understand that approval is not given until approval is given.”

In 2015, city council voted to hike the fees charged to developers who wish to block lanes of traffic or sidewalks but Tory said that the higher costs have not had the impact he had hoped they would.

“I tried the financial carrot and the results just aren’t good enough so now we will have to use the regulatory stick,” Tory said Tuesday.