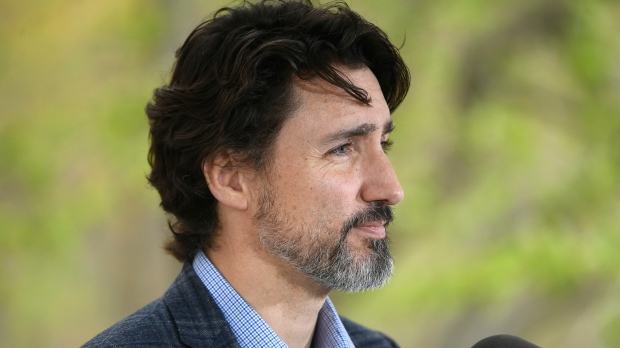 Prime Minister Justin Trudeau speaks during his daily news conference on the COVID-19 pandemic outside his residence at Rideau Cottage in Ottawa, on Saturday, May 16, 2020. THE CANADIAN PRESS/Justin Tang

The conference comes just as Canada is competing for one of two non-permanent seats on the UN Security Council next month against Norway and Ireland.

The UN vote is set for next month, and Canada is running on a platform of trying to help rebuild the post-pandemic world.

Unless countries come together now to co-ordinate a recovery plan, the UN estimates the pandemic could slash nearly US$ 8.5 trillion from the world economy over the next two years, forcing 34.3 million people into extreme poverty this year and potentially 130 million more over the course of the decade.

"And for the global economy to recover, and for our domestic economies to bounce back, we need a global, co-ordinated plan," Trudeau said in a prepared text of his opening remarks.

"Our citizens need to have confidence in international institutions that leave no one behind and are capable of overcoming global challenges."

More than 50 heads of state and government are to participate, including Germany's Angela Merkel and France's Emmanuel Macron, along with representatives of the World Bank, the International Monetary Fund and the private sector.

It was not certain late Wednesday, however, whether U.S. President Donald Trump, who has argued that wise leaders put the interests of their own countries first, would take part.

"This is our chance to begin a conversation on how we can emerge from this truly global crisis as a stronger and more cohesive world -- one that creates growth for everyone, addresses inequality, and cares for the most vulnerable," Trudeau said.

"Canada is ready to do our part, as we help bring the world together in the fight against COVID-19."

In a release about the event, the UN says all countries face economic strain due to the pandemic, particularly developing countries which were already in "debt distress" before the crisis and can't afford to cushion the blow for their citizens or to undertake fiscal stimulus measures.

Earlier this week, when Trudeau announced his role in the conference, he argued that ensuring poorer countries survive the crisis is not just the right thing to do, it's in Canada's own self-interest.

"Canadian jobs and businesses depend on stable and productive economies in other countries, so it matters to us how everyone weathers this storm," he said Tuesday.

The conference is to address "six urgent areas of action" to mobilize the financing needed for a global recovery.

Those six areas include:

-- Expanding liquidity in the global economy and maintaining financial stability.

-- Addressing debt vulnerability for developing countries "to save lives and livelihoods for billions of people around the world."

The conference aims to create a discussion group in each of the six areas, with the goal of providing concrete proposals by mid-July.

"There is no time to lose," the UN release says. "Solutions cannot wait and decisive action is required."