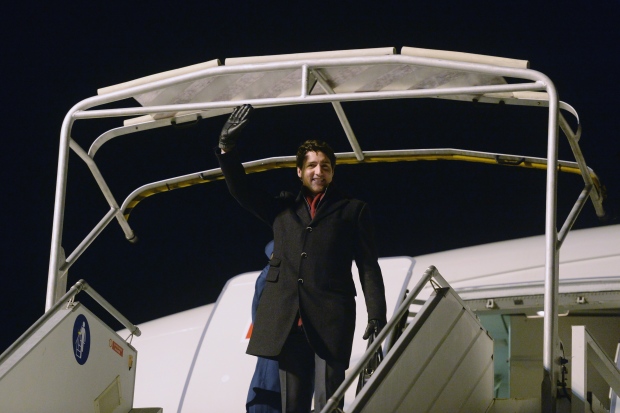 STRASBOURG, France -- Prime Minister Justin Trudeau showed the European Union some much needed love today in a highly-anticipated speech following its ratification of the free trade pact with Canada.

But he also warned that the Comprehensive Economic and Trade Agreement doesn't succeed it could be last deal of its kind.

"The European Union is a truly remarkable achievement, and an unprecedented model for peaceful co-operation. Canada knows that an effective European voice on the global stage isn't just preferable -- it's essential," Trudeau said.

"If we are successful, CETA will become the blueprint for all ambitious, future trade deals. If we are not, this could well be one of the last."

It has been a rough year for the 28-country EU with Britain's decision to leave the bloc, a decision praised by U.S. President Donald Trump who has mused about which country might be next.

Trudeau is the first Canadian prime minister to address the European Parliament, and his speech was a shot in the arm for the alliance after last summer's pro-Brexit vote that has sparked the historic and protracted divorce negotiation between Britain and the EU.

Trump's ambassador designate to the EU, Ted Malloch, told the Associated Press earlier this week that the EU's "blatant anti-Americanism" is "problematic."

In his speech, Trudeau said people who complain that trade deals benefit only a few have a valid concern, but deals like the Canada-EU free trade pact are good for all.

Trudeau delivered that message in his much-anticipated address to the European Parliament today, his attempt to argue for free trade in the face of an increasingly hostile, populist opposition that includes the Trump administration.

"Now, we live in a time when many people are worried that the current system only benefits society's luckiest few. And their concern is valid," Trudeau said.

"The anxiety people have towards the economy and trade -- the worry that our kids won't have access to the same jobs and opportunities that we had -- can be addressed only if we ensure that trade is inclusive, so that everyone benefits."

But Trudeau said the pact does in fact deliver on that.

"Trade that is free and fair means we can make the lives of our citizens more affordable, and create more jobs."

The prime minister's pro-trade, anti-protectionist message to the European lawmakers in Strasbourg, France will comes one day after they voted to ratify the Canada-EU free trade deal.

Anti-trade groups are vowing to continue the fight against the deal, which they say benefits large corporations at the expense of working people.

Anti-trade movement is gaining ground in Europe and with Trump's protectionist "America first" posture that has killed the U.S. free trade negotiations with Europe, as well as the Trans-Pacific Partnership that would have spanned 12 Pacific Rim countries, including Canada.

Parliament is expected to ratify CETA in the coming months, which means 90 per cent of it would come into force under provisional application. That would allow the deal to take effect without the ratification of the European Union's 28 member countries and numerous regional governments.

"We know that, in these times, we must choose to lead the international economy, not simply be subject to its whims."

Anti-trade groups vowed to do everything possible to rally opposition in regional parliaments to eventually block the full implementation of the pact, which will knock down tariffs for 35 million Canadians and 500 million Europeans.

Politicians on both sides of the Atlantic Ocean hailed Wednesday's ratification as a win for the values of openness in the face of anti-trade movements.

"With Canada we share the democratic values of tolerance and openness. We co-operate in tackling common challenges such as migration, sustainable development, climate change and terrorism," said EU Trade Commissioner Cecilia Malmstrom in what appeared to be a thinly veiled rebuttal to Trump's protectionist and anti-immigration policies.

International Trade Minister Francois-Philippe Champagne said the deal was "good for workers, consumers and a new standard for trade."

The Conference Board of Canada said the agreement good for both sides because economic history demonstrates that greater free movement of goods, services and people is a catalyst for economic growth.