The federal government will force incoming international travellers to quarantine in hotels for at least three days and suspend all travel to Caribbean destinations in a bid to narrow the chance more coronavirus variants enter the country.

Trudeau said that among other measures, all arrivals to Canadian airports will have to pay out of pocket to quarantine in a hotel before being allowed to circulate freely in the country.

All arrivals will also have to undergo PCR COVID-19 testing and then isolate in “an approved hotel” for up to three days while they wait for their result.

Trudeau said the cost of this hotel quarantine stay will be “more than $2,000” per traveller.

Those who test negative will then be allowed to return to their home or other final destination and complete the rest of a 14-day quarantine under “increased surveillance.”

Positive cases will have to stay in hotels until they recover.

Trudeau said they hope to have testing and quarantine functions up and running in the next several weeks.

Additionally, all flights to and from vacation destinations in the Caribbean and Mexico will stop as of Sunday and remain suspended until at least April 30, Trudeau said.

“Now is just not the time to be flying,” Trudeau said.

“We can look forward to a better time when we can all plan those vacations.”

Trudeau said the four air carriers that carry passengers to the Caribbean and Mexico, Westjet, Air Canada, Sunwing and Air Transat, are cooperating with the travel restrictions.

All incoming foreign flights will now only be permitted to land in four locations; Vancouver, Toronto, Montreal and Calgary, where testing and hotel quarantine capabilities will be set up.

Intergovernmental Affairs Minister Dominic LeBlanc said the new quarantine and testing program will complement and reinforce measures that provinces such as Ontario had already indicated were underway.

“Responding to the concerns of the Ontario government, and they have offered, from the beginning of this conversation to be partners with us. And I think it's important to reinforce that partnership and say that. We'll work with the Ontario government on all these measures going forward.” 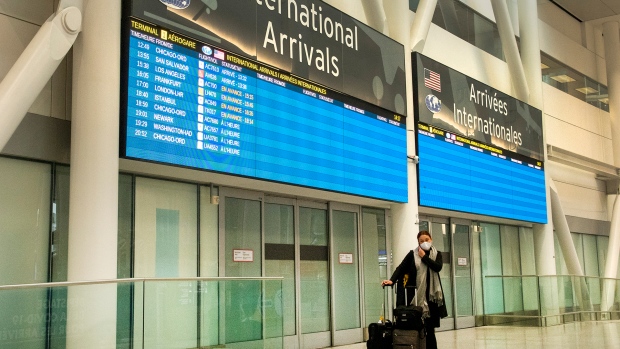 All incoming non-essential travellers at Canada’s land borders with the United States will also soon have to present a negative result from a PCR test before being allowed entry.

“Just one case of the variant that comes in could cause significant challenges,” Trudeau said, referencing the outbreak of B.1.1.7 coronavirus at a Barrie long-term care home that has so far killed at least 50 people.

It is extremely low the number of cases that are traced back to international travel, but it is not zero,” Trudeau said.

Earlier this month, the federal government required all incoming travellers to present proof of a negative PCR COVID-19 test completed within the past 72 hours.

Incoming travellers, excluding cross-border workers and truckers, have been required to quarantine for 14 days upon arrival to Canada since last March.

Other countries including Australia and New Zealand have been using hotel isolation periods for the entire length of the pandemic.

For its part, Air Canada said the new suspensions and limits on air travel will not really impact them much further than all previous pandemic-related measures had already.

“System-wide the incremental impact on Air Canada's cash burn is not material given the already reduced levels of passenger traffic resulting from COVID-19 and travel restrictions," CEO Calin Rovinescu said.

Westjet CEO Ed Sims said his airline would comply with the restrictions and bring passengers outside of Canada back over the next two weeks.

“While we know that air travel is responsible for less than two per cent of cases since the start of the crisis, and even less today, we recognize the Government of Canada’s ask is a precautionary measure.”

Air Transat said it will be suspending all its flights until the end of April, resulting in temporary layoffs of flight crews and support staff.

"We are putting in place the measures requested by the Canadian government, including not travelling to the South. This forces us to temporarily suspend all our flights, including to Europe," said Jean-Marc Eustache, the president and chief executive officer of Air Transat.

The company said it will operate several dozen flights over the next two weeks to return customers to Canada.

"We will do everything we can to return our customers back to Canada," Eustache said.

"We obviously share the government's objective to protect Canadians from COVID-19, including the new variants, and this is what all of our personnel have been doing in recent months, particularly on board our aircraft, with a comprehensive program of adapted sanitary measures."

A lone passenger stands outside the International Arrivals area at Pearson Airport in Toronto on Tuesday January 26, 2021. THE CANADIAN PRESS/Frank Gunn