TORONTO - Prime Minister Justin Trudeau welcomed his Mexican counterpart to Canada on Monday, saying the two leaders would have much to talk about in the coming days, including the flow of people and goods.

“Canada and Mexico are more than just friends,” Trudeau said in welcoming remarks. “We are partners. And it's what we share as partners and friends that I'd like to celebrate.”

He made a point of thanking Mexico for sending 41 firefighters to Fort McMurray, Alta., to help fight the massive wildfires there last month. That help is what good neighbours do and is much appreciated, Trudeau said.

The prime minister said the two men would talk about finding solutions to climate change and working toward better protection for the environment.

The two countries have economic interests in common and both understand the importance of a productive and respectful relationship that allows for greater trade, stronger growth and more job creation, Trudeau said.

Trudeau said many Canadians travel south for Mexican culture, cuisine and “a slightly more hospitable climate,” while Mexican students come north to study in this country.

The prime minister said it was hard to believe that more than six years have passed since Canada last welcomed a Mexican president on a state visit.

Speaking in Spanish, Pena Nieto called the visit and renewal of bilateral relations a “landmark in history.”

“You are taking it further,” he said to Trudeau. “It's not just about co-operation and the economy, we're here to deepen our friendship.”

Pena Nieto talked about legal and orderly immigration, and said indigenous peoples strengthen both countries. He also talked about working toward a healthier environment.

Under Trudeau, Pena Nieto said, Canada has shown itself to be a “progressive” country.

“This is what the world needs today,” Pena Nieto said. 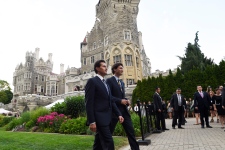