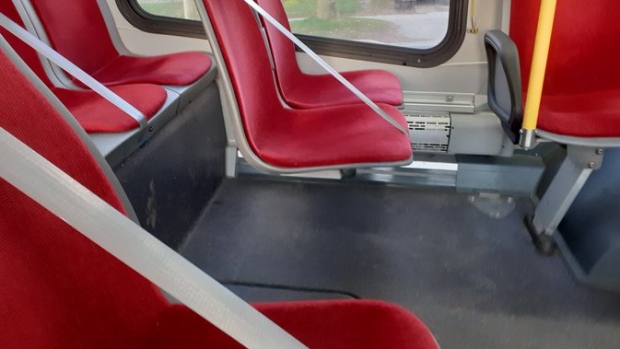 The TTC stands to lose nearly $300 million by Labour Day even with the implementation of service cuts, temporary layoffs and the deferral of some capital projects, a new staff report reveals.

The 33-page report, which will be considered by the TTC board during a virtual meeting on Wednesday, attempts to provide an outline of the immense financial pressures facing the transit agency amid an “unprecedented decline” in fare revenue brought about by the COVID-19 pandemic.

It reveals that the TTC has already lost $123 million in revenue and expects to continue losing about $90 million a month between now and Labour Day.

It says that without taking any action at all that would mean a loss of $520 million by Labour Day.

The TTC has, however, reduced service by approximately 15 per cent to meet demand and plans to temporarily lay off 1,000 operators and 200 non-unionized employees.

It has also reduced its 2020 capital budget by $208 million, allowing some of that money to be reallocated to a fund that will help offset revenue losses.

Nonetheless, the report still estimates that the TTC will be facing a shortfall of nearly $298 million by September with no way to cover those losses itself.

The report also warns that the financial impacts will continue to be felt throughout 2020 and perhaps into 2021 “as some level of pandemic response measures will need to continue for both staff and customers, including remote working arrangements.”

“Despite best efforts to contain costs, the magnitude of this shortfall cannot be borne by the TTC or the city alone, especially when all COVID-19 pressures faced by the city are taken into consideration,” the report warns.

Ridership revenue down 86 per cent

The TTC says that weekly ridership dropped by approximately 7.3 million rides in late March as public life was brought to a virtual standstill in order to limit the spread of the virus.

It then continued to decline in early April as the province reduced the list of businesses deemed essential.

By the end of the month, ridership revenue was down 86 per cent system-wide, which equates to a weekly loss of $20 million.

The losses are also being compounded by the millions of dollars in added costs that the TTC has had to take on to maintain service during the pandemic.

The report estimates that it will face more than $15 million in new ancillary costs by Labour Day with those costs also likely to extend beyond then.

The total includes about $2 million in overtime pay that was required after staff absences doubled in the early days of the pandemic, about $6 million for wipes, masks and other personal protective equipment and about $4.5 million to cover the cost of regularly disinfecting and cleaning vehicles.

There also appears to be little hope that things will improve in May either as the report notes that it has already seen a 92 per cent decline in the sale of fare passes this month when compared to March.

“The gradual recovery is expected to place an ongoing financial strain on the TTC and its ability to support Toronto’s broader economic recovery,” the staff report notes.

The stark picture painted by the staff report comes after the release of a survey commissioned by the Amalgamated Transit Union that found a high level of support for a bailout of public transit agencies.

The Probe Research survey found 79 per cent of Canadians either strongly support or somewhat support a $5 billion federal bailout of transit agencies. In the Greater Toronto Area that number rose to 82 per cent.

The survey also found that residents in the GTA were more likely to say that public transit is underfunded compared to Canadians on the whole (45 per cent versus 36 per cent).

“We need the federal government to fund transit operations because it is a critical service, especially during the pandemic,” Carlos Santos, who is the president of ATU local representing TTC workers, said in a press release. “Public transit moves essential workers to important jobs and if the government keeps underfunding transit operations it will threaten the commute of essential workers during this difficult time.”

The federal government has previously rolled out numerous programs to support industries hard-hit by the COVID-19 pandemic but has not yet announced any assistance for public transit agencies.

About two-thirds of the TTC’s operating costs are covered by fare box revenue.