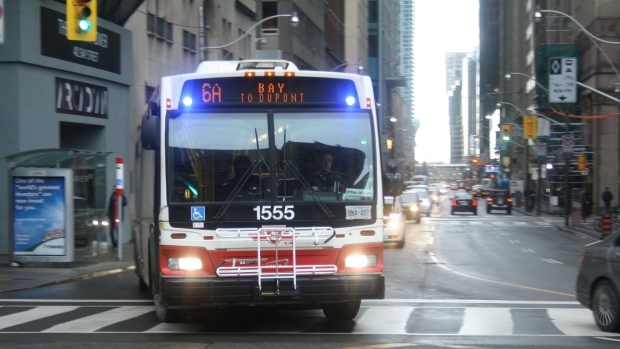 A TTC bus is shown in this file photo. (Chris Fox/CP24.com)

TORONTO -- An attempt to make random drug and alcohol testing mandatory for the majority of Toronto public transit employees will be difficult, says a legal expert who cites a recent Supreme Court of Canada decision.

"For unionized workers, both arbitrators and the Supreme Court of Canada have generally endorsed a view that random drug testing would only be permitted in a situation where the employer was able to show that there was a very serious drug problem in the workplace," said Eric Tucker, a professor at York University's law school, Osgoode Hall.

In 2013, the country's top court ruled that random drug and alcohol testing for those working in dangerous situations was not justified unless there was a substance abuse problem among the workforce.

The Toronto Transit Commission is building a case to show the problem exists in its workforce.

"The Supreme Court said employers have to show drug and alcohol abuse is a problem," said TTC spokesman Brad Ross.

"Because we see these numbers continue to rise, we have an obligation as a public transit agency and as an employer of 14,000 people to make the TTC as safe as we can possibly make it."

He said there were 16 cases of impairment or refusal to take an impairment test in 2014, 30 such instances in 2015 and six from January to the end of March this year.

The union representing much of the TTC workers in Toronto, Amalgamated Transit Union Local 113, is fighting it.

"There are the occasional incidents, but that is no different than the general public," said Paul Thorp, the head of Amalgamated Transit Union Canada, which represents more than 30,000 transit workers across the country.

"On the whole, our operators are trained professionals and arrive for work fit for duty."

But the case is not in court yet -- the entire fitness-for-duty police has been toiling away in arbitration since 2011.

The TTC currently tests for drugs and alcohol after an incident occurs, after an employee returns from a treatment program or if they have a reason to believe someone is under the influence, Ross said. The policy came about after a worker who was killed in a subway tunnel in 2008 had marijuana in his system.

The issue came to light Monday after the TTC sent a letter to its employees notifying them of the change.

It might be a move to force the issue to court, Tucker said.

Ross hinted as much.

"If the matter ultimately comes before the courts, then so be it, that may be the best place for this to be resolved," he said.

"This isn't about what you did last night or last weekend, it's about are you fit for duty when this test was taken? If you had a drink last night, it's fine. If you smoked a joint, we don't care, it's none of our business -- having said that, we have programs for people with dependency. What you do recreationally is none of our business, but what you do at work is."

In 2013, the Supreme Court of Canada ruled that a mandatory random alcohol testing policy imposed by Irving Pulp and Paper at a Saint John, N.B., kraft mill in 2006 was unreasonable and was properly rejected by a labour arbitration board.

In the 6-3 decision, the justices sided with the Communications, Energy and Paperworkers Union of Canada, which brought a grievance against the Irving policy.