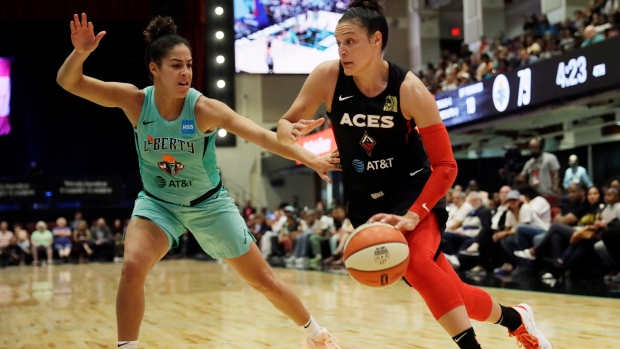 Two tech entrepreneurs have launched a bid to bring a WNBA team to the city.

Daniel Escott and Max Abrahams, who are both partners with the agency New Media Group, set up a series of social media accounts to raise awareness about their efforts to lure the U.S. based women’s professional basketball league north last month and the duo say that they now plan to submit an application for a franchise sometime this summer.

It remains unclear whether the WNBA is interested in expanding beyond its current roster of 12 teams, though in an interview with CP24 on Tuesday Escott expressed optimism about the potential to establish the league’s first franchise in Canada.

“It is important to realize that they are currently negotiating a new collective bargaining agreement and that the industry and the WNBA specifically are at a bit of an inflection point right now with a lot of their teams just starting to turn profits. But the big thing to remember is that Toronto is a market unlike any other and has been on the radar of the WNBA for a very long time,” he said. “It has never quite been the right time but we have perfect storm here right now.”

Escott said that that he and Abrahams started to discuss the potential of bringing a WNBA team to Toronto back in April as a sort of “backburner idea” but realized through the course of the Raptors run to an NBA title that there will never be a better time.

He said that they have since begun discussions with an unspecified venue where a team could play and believe that they could be operational in time for the 2020 WNBA season.

Their efforts come weeks after the WNBA announced a new TV deal that will see 53 of its games broadcast in Canada this season. There were also a record four Canadians on WNBA rosters for opening night, including Toronto’s Kia Nurse.

The NBA owns 50 per cent of the NBA and Commissioner Adam Silver has said in the past that the league loses about $10 million annually, meaning that the owner of any Toronto-based franchise may require deep pockets.

The Raptors ownership group, Maple Leaf Sports and Entertainment, is not involved with Escott and Abraham’s efforts to secure a WNBA franchise.