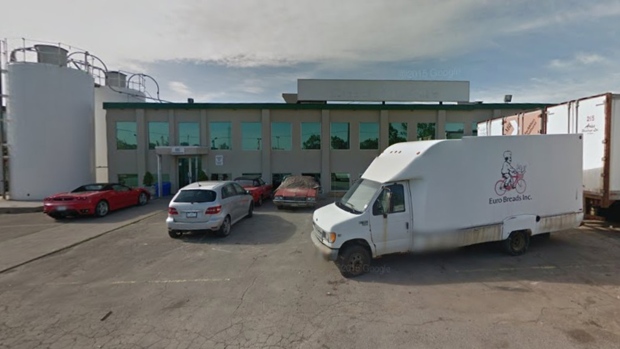 A bakery at 111 Brockhouse Road is seen in a Google streetview image from June 2014. (Google)

Two men listed as a director and the CEO of a small Toronto pharmaceutical company allegedly attempted to buy a large Etobicoke bakery worth millions without paying a dime, in what Toronto police described as a “high value fraud.”

Financial crimes investigators say that on Aug, 19 of this year, they were made aware that two men approached the owner of Supreme Sweets, a bakery located on Brockhouse Road in Etobicoke, with an offer to purchase the business.

A sale agreement was drawn up and the company the men belonged to, Easton Pharmaceuticals, issued a statement saying it had bought the bakery to launch a cannabis edibles line.

“Easton intends on expanding the existing business, as well as entering the lucrative cannabis edibles market. The Company has deployed sales people and has invested in further infrastructure to grow the business,” a quarterly report filed by Easton Pharmaceuticals in October stated.

The bakery consisted of a 36,000 square foot factory, containing what police said was $9 million worth of production equipment inside.

But police allege the buyers never actually paid anything to acquire any of it.

“There was no intention of payment for the business,” investigators said Tuesday.

In its latest quarterly report, filed in October, Easton Pharmaceuticals listed its headquarters as the address of the bakery facility.

On Oct. 29, a suspect identified as Vincent DeMasi, 51, of Toronto was arrested and charged after a search.

The next day, Karayanopoulos, 49, of Oakville, who is also known as Evan Karras, was arrested and charged.

The men are expected to appear in court at 2201 Finch Avenue West on Dec. 9.

Easton Pharmaceuticals did not respond to a request for comment.

Three publicly listed phone numbers for Karayanopoulos are currently out of service.

The over-the-counter stock trading website that lists Easton’s stock, OTC Markets, says it has suspended trading of the shares due to a “public interest concern associated with the company.”

Investigators released images of both men, saying they fear there are other victims who have not yet come forward.

Evangelos Karayanopoulos is shown in a Toronto police handout image.