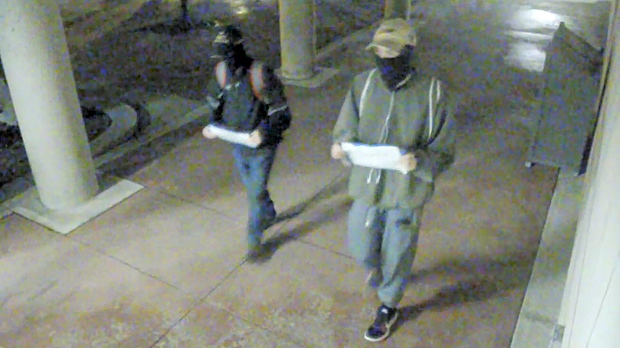 Suspects wanted in an hate crime investigation are seen in a surveillance camera image. (HRPS)

BURLINGTON, Ont. -- Police have charged two men from Burlington, Ont., with wilfully promoting hate months after racist and anti-Semitic propaganda was posted around the city.

Halton regional police say that in late May, someone found a note with a racist message on their vehicle.

They say a few days later, an anti-Semitic poster was placed on a traffic post.

A few days after that, “hate propaganda” was left on vehicles that were parked in a church's parking lot and anti-Semitic messages and imagery were left on the front doors of the Art Gallery of Burlington and city hall.

Police say two men, aged 21 and 22, were arrested Friday morning and charged with two counts each of wilfully promoting hate.

They're due in court later this month.