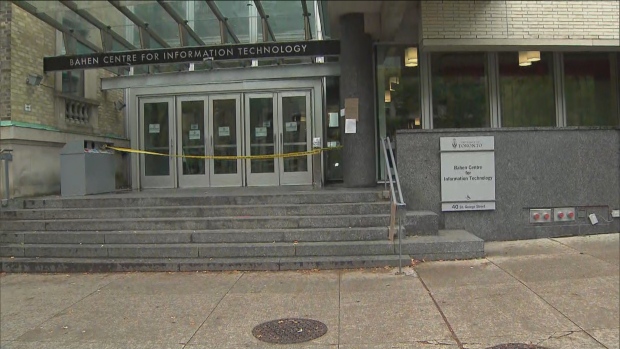 U of T has installed temporary safety barriers at the Bahen Centre, where a student was found dead by suicide on Friday. (CP24)

TORONTO - Canada's largest university has installed temporary safety barriers at the computer science building on its downtown Toronto campus, where a student was found dead by suicide on Friday.

The University of Toronto said little about the circumstances surrounding the student's death, but the union representing education workers at the school said it was the fourth confirmed suicide on the St. George campus since June 2018.

“The safety and well-being of our students are our top priorities,” said Sandy Welsh, the school's vice-provost of students, in a written statement. “We've listened to concerns about the building and are putting in place measures that will improve safety.”

Welsh said the school has been working with architects to design permanent safety barriers in the Bahen Centre since spring, when another student died in the building.

A university spokesman said the building had unguarded “areas of elevation” that are now blocked off. Construction on a permanent solution is set to begin later this fall.

He said three people killed themselves on the St. George campus in 2017, and another three in 2018, though one of those people was not a member of the “school community.” The numbers for 2019 so far are not yet available.

The spokesman noted that there are a number of resources for students in need of mental health supports, including recently introduced same-day counselling.

The education workers' union, CUPE 3902, said a drop-in centre was available in front of the Bahen Centre on Monday for all those needing support.

“We are devastated to lose a student, a part of the U of T community,” the union said in a statement. “Our thoughts are with this student's family, friends, and classmates. Our thoughts are also with the workers who were on the scene: first responders and caretakers. The work you do is meaningful and appreciated.”

Neither the Office of the Chief Coroner of Ontario nor Statistics Canada tracks how many students die by suicide, but according to the most recent federal data from 2017, it was the cause of death for 547 people between the ages of 15 and 24.

Earlier this year, about 55,000 students across 58 post-secondary schools responded to a survey that indicated roughly 14 per cent of them had attempted suicide. Nearly three per cent had tried to take their own lives in the past year.

The National College Health Assessment also found that 34 per cent of students had seriously considered suicide at some point in their lives. Sixteen per cent of respondents had those thoughts in the past 12 months.

“We know that 70 per cent of mental illnesses present themselves in childhood, adolescence or young adulthood,” he said. “We have all these stats, we're aware of the struggles, we're aware of the pressures put on these students. So we have to ensure that when they do attend post-secondary, that they're getting the support that they need.”

He said students should feel supported on campus, be it through counselling or peer-to-peer programs.

This report by The Canadian Press was first published Sept. 30, 2019.

U of T students laid flowers and wrote messages in a table set up in front of the Bahen Centre. (Ricardo Alfonso)

A table has been set up in front of the centre for students to write notes and get information on mental health. (Ricardo Alfonso)