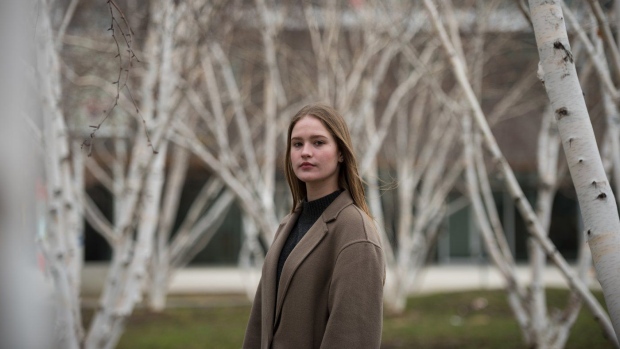 TORONTO - Darya Ivantsova has been having a hard time focusing on her studies.

The Ukrainian international student has been spending most of her time communicating with her family and reading about the Russian invasion of her home country while trying to figure out how she's going to financially support herself now that her parents have lost their income.

The entire situation has made it tough to concentrate on school work at the University of Toronto, she says, recalling an emotional time in a class recently.

“I was looking at the screen and the professor and I just didn't listen to them basically,” she says in an interview.

“After the class, the professor came up to me and asked me about this whole situation and I just started crying just because it's really hard to realize this is actually happening and that your family is there and I'm here in Canada and I cannot do anything about it.”

Ukrainian students in Canada say they've been worrying about being able to afford living here as their families at home are displaced and lose access to their earnings. That, coupled with constant concern for their loved ones, has made daily life difficult, they say.

Ivantsova, 21, said her parents and younger sister managed recently to flee their home city of Kharkiv in eastern Ukraine for Bulgaria, where they are living at a friend's house.

Typically, her parents help support her financially, but after they fled Ukraine and lost access to their income, Ivantsova is now sending them a small amount of money from her earnings as a part-time teacher assistant at her university.

“I have to work just to help myself with finances because my parents (were) cut down from the banking system in Ukraine. So they are not sending money to me, so I have to support myself right now,” she says.

Michaela Yarmol-Matusiak, a student at Western University and the diversity officer at the Ukrainian Canadian Students' Union, says most Ukrainian students have paid their tuition fees for this semester and have housing until the end of April, but many are unsure about their options after the end of the term.

“(They are) worried about finances,” she says. “Students have come to us (about) things like groceries or public transport.”

Some Ukrainian students in Canada are also concerned about having a place to stay in the next couple of months.

“Some of them are graduating or had plans to go back to Ukraine and sort of spend the summer there,” she says.

Some universities have announced measures to financially support Ukrainian students in Canada.

The University of Alberta said recently that it will waive up to all of next year's tuition fees for Ukrainian students suffering financial hardship due to the war.

The University of Toronto is also offering financial assistance to students affected by the war in Ukraine, saying graduate and undergraduate students are able to apply for emergency grants program and ask for tuition deferrals for the summer and fall semester.

Mariia Minaieva, a Ukrainian student in the public relations program at Humber College, says she has a part-time job at a PR agency but her income is not enough to cover all of her needs in Canada after she lost her family's financial support.

She says she recently contacted her school to ask for help.

“I wanted to deal with this on my own, but after four weeks of what is going on back home, I understand that I'm not able to figure it out,” she says. “They gave me a gift card from a grocery (store) ... which kind of alleviates the necessity to buy your food.”

Minaieva, 20, was planning to visit her family in Ukraine this summer, but now she's unsure what the coming months will bring.

“Ideally I want to be able to see my family after my graduation, but right now I think I will look for a job just to build up my career and to be able to help myself first financially and then help my family,” she says.

Daria Korzhenko, a third-year tourism and hospitality student at Humber College in Toronto, says she's also under financial strain due to the war in her home country.

But she says the conflict has also caused problems between her and her Russian roommate, whom she's been friends with for three years.

“Mentally, I was really unstable, I couldn't stop crying and she didn't support me,” Korzhenko, 20, says. “She supports the war ... I'm in a horrible situation right now.”

More than 3.7 million people have fled Ukraine since the Russian invasion started a month ago.

This report by The Canadian Press was first published March 27, 2022.