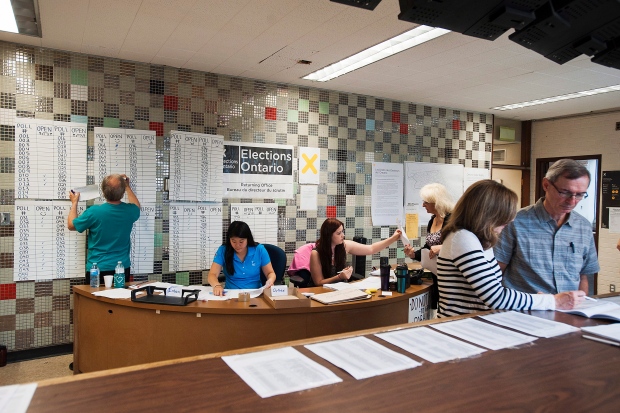 Election workers at a Parkdale/High Park Returning Station on Mavety Street mark down which polls are open for the Ontario Provincial Election in Toronto on Thursday, June 12, 2014. (The Canadian Press/Aaron Vincent Elkaim)

TORONTO -- Ontario managed to reverse two decades of declining voter turnout in this week's provincial election, but observers warned that the increase -- positive as it was -- still meant just over half of the province made it to the polls.

Unofficial results indicated 52.1 per cent of the province's 9.2 million eligible voters cast their ballots, compared to 48.2 per cent in the last election in 2011, Elections Ontario said on Friday.

That meant 4.8 million Ontarians had a say in shaping the Liberal majority government that emerged from Thursday's election.

"It's good news that the ongoing free fall in voter turnout seems to have reversed itself," said Myer Siemiatycki, a professor in the politics department at Ryerson University in Toronto.

"On the other hand, it's barely over the 50 per cent mark and we are still left stuck with the reality that basically half the population doesn't vote. That is a sorry reminder of how entrenched our democratic deficit is when it comes to election time."

Voter turnout in Ontario had seen a steady decline from 1990, when it was 64.4 per cent. The latest figures bring Ontario back to the level of engagement at the polls that it saw in the 2007 provincial election.

What might have motivated more citizens to vote this time around could have been the clearly differentiated choices the three major parties laid out for them, said Siemiatycki.

Premier Kathleen Wynne's Liberals touted themselves as the balanced alternative that believed in supporting the province through measures like a home-grown pension plan and cash for businesses to invest in Ontario, while the Progressive Conservatives staked out the right with their promise of a cost-cutting government that would lower corporate taxes to spur private sector job creation. The NDP, meanwhile, shifted to more mainstream and business-friendly pledges as they promised pocketbook relief for working families.

"It was an election campaign in which the choices were pretty stark," Siemiatycki said, adding that the allegations of corruption and scandal that the Liberals managed to beat down at the ballot box likely caught the interest of at least some voters.

Perhaps even more of a factor than the Liberal record was Tory Leader Tim Hudak's tough-to-stomach pledge of slashing 100,000 public-sector jobs as part of his plan to eliminate Ontario's $12.5 billion deficit in two years, said another observer.

"Certainly his base came out, and clearly his base is not enough to win power," said Anna Esselment, a political science professor at the University of Waterloo.

"It suggests that his campaign might have made enough people think twice about his prescription for economic prosperity, that might have motivated others to come out."

Still, Ontario's slight bump in voter turnout was nothing to cheer about, said Esselment, noting, however, that citizens weren't necessarily disinterested in politics.

"Evidence on interest in politics is often that people are interested in it, but that doesn't always translate to voting," she said. "It's not that they think that nothing matters to them, or that none of this impacts them...but there are these other barriers."

Those barriers could include the voters' busy professional and person lives, the emphasis on negative aspects of a campaign which can have a "muting" effect on voter participation, and the onslaught of competing political messages before election day, said Esselment.

"The voter feels badly that they're not informed enough...because they can get the information, but there's so much of it they don't know how to sift through it," Esselment explained. "And then there's the fact that they're really busy."

The challenge for politicians over the next four years will be to work on engaging more voters outside of a campaign period so that even higher numbers of citizens will participate in the next election, said Jane Hilderman, acting director of Samara, a charitable organization which works to improve political participation in Canada.

"We need to think about political participation that also has to happen in between elections," she said.

"It's that foundational work that needs to happen, where you're asking Ontarians for their ideas and their contributions to the political process in between, that will help bridge the gap that's been slowly building between those who are in politics and citizens on the outside."