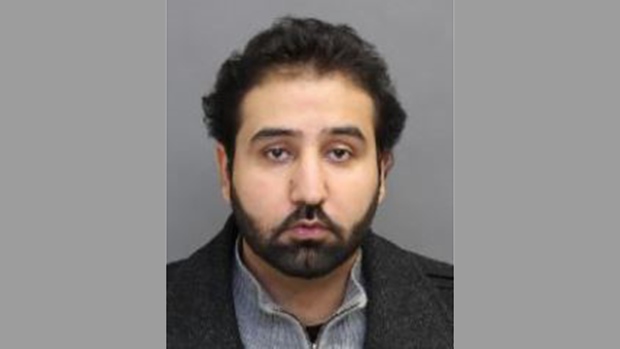 Thornhill man Pedram Rabie, 31, is pictured in this police handout photo. Rabie is wanted in connection with a 2020 triple shooting at a Brampton cemetery. (Handout /Peel police)

Peel Regional Police have issued a Canada-wide warrant for a Thornhill man in connection with a triple shooting that occurred at a Brampton cemetery over the summer.

Police were called to a cemetery in the area of Chinguacousy Road and Bovaird Drive at around 3:45 p.m. on Aug. 31 after shots were fired among a crowd of several people, sending some of them scrambling for cover.

Three people were injured in the gunfire.

One of the victims was found on nearby Mistdale Crescent after he collapsed on the porch of a townhouse. He was transported to a trauma centre for treatment. Another was taken to hospital after he showed up at a fire hall about a 20-minute drive away. The third victim made his own way to a Brampton hospital.

At least two of the victims sustained life-threatening injuries, according to paramedics. All three survived the shooting.

A nearby home, a school, and four vehicles on the cemetery grounds sustained damage from the gunfire.

No funeral services were scheduled to take place at the time of the shooting and police have not said why the crowd was gathered there.

On Dec. 3, Peel police released photos of three persons of interest in the case and appealed to the public for help in identifying them.

Police announced Monday that they issued a Canada-wide warrant on Feb. 19 for 31-year-old Pedram Rabie in connection with the case.

Police are asking anyone with information to contact investigators or to call Crime Stoppers anonymously.