'We are extremely traumatized:' Family of two young siblings struck and killed by vehicle in Vaughan release statement 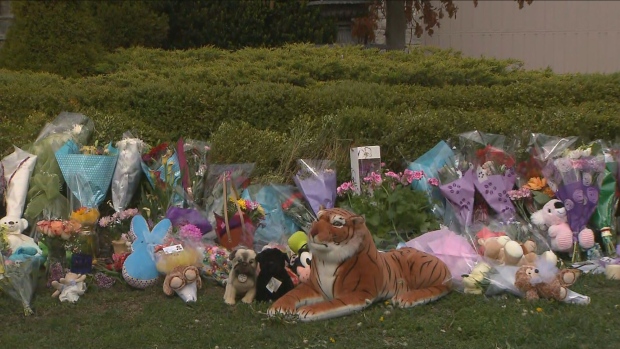 Flowers and stuffed animals are piled outside the Vaughan home where two young children were struck and killed in their driveway over the weekend.

The parents of two young children who were struck and killed by a vehicle while playing in their Vaughan driveway over the weekend say that they are “extremely traumatized” by the incident and are asking for privacy as they grieve.

The incident occurred on the quiet, residential street, located near Dufferin Street north of Teston Road, at around noon on Sunday.

Police said the two siblings were playing in the driveway of their home along with a neighbour, who was fixing a bike, when the three were struck by a black Mercedes sedan.

The four-year-old boy was pronounced dead shortly after the crash and his 10-year-old sister died in hospital on Monday. The neighbour was also taken to hospital but police said he sustained non-life-threatening injuries.

The children have since been identified as Jax and Anaya by neighbours and a family friend.

“We are extremely traumatized by the tragic loss of our daughter and son,” the family said in a brief written statement that was released by police on Tuesday afternoon. “The past days have been extremely difficult for our family. We appreciate the prayers and thoughts of all those grieving with us.”

The driver of the Mercedes, a 16-year-old Richmond Hill resident, was arrested following the collision.

He is expected to make his first appearance in court on Wednesday.

On Tuesday a growing memorial was visible outside the Athabasca Drive home as neighbours and friends dropped by to pay their respect.

One neighbour told CTV News Toronto on Monday that the family moved to the neighbourhood during the pandemic. She described the four-year-old boy as a “delightful child.”

Investigators are asking anyone with information or video footage of the deadly crash to contact police or Crime Stoppers anonymously.