'We are not trying to be killjoys:' Crews begin painting physical distancing circles at Trinity Bellwoods Park 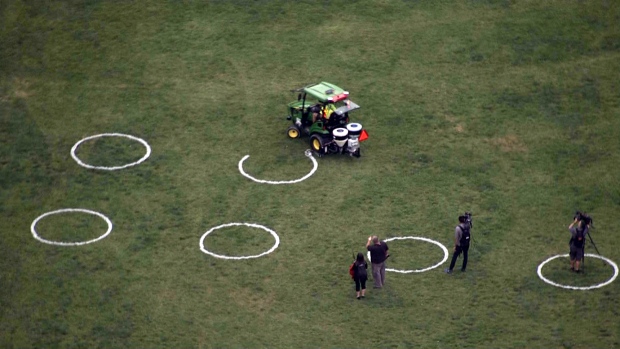 Crews have begun painting circles on the grass at Trinity Bellwoods to encourage physical distancing and avoid a repeat of last weekend when thousands of people descended on the west-end park.

The city announced on Wednesday afternoon that it would paint the circles as a way to remind users about the importance of physical distancing after an estimated 10,000 people packed the park on Saturday, drawing condemnation from public health officials in the process.

The circles, which crews began painting at around 6:30 a.m., have a diameter of eight feet and are being placed 10 feet apart to ensure proper physical distancing between groups.

City spokesperson Brad Ross says that the circles are big enough for two people to lie down or three people to sit cross-legged, though he said that a city bylaw requiring that people from different households remain at least two metres apart while in parks does remain in effect and that violators can still face fines of up to $750.

The cost of painting each circle is about $12.

“People who are sitting outside the circles not physically distancing they will be asked to move on but we are not here to be killjoys. We want people to use the park. That is why we are doing this,” Ross said. 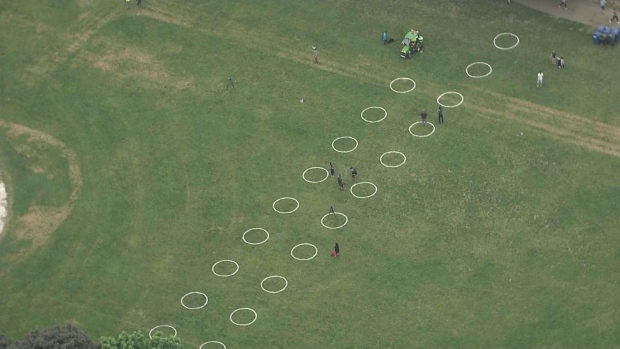 Trinity Bellwoods is about 85 acres and spans from Queen to Dundas streets but Ross said that the circles are initially only being painted in the area surrounding several baseball fields located in the middle of the park, as that is where the large crowds were mostly clustered on Saturday.

He said that the city will be monitoring crowds in the park going forward and could paint between 300 to 400 circles if it decides that it needs to expand the initiative throughout all of Trinity Bellwoods.

He said that city officials will also monitor crowding at other parks and remain open-minded towards expanding the circle program if other hotspots emerge.

Similar circles have also been painted at parks in San Francisco and New York City.

“We understand that particularly in the downtown core where there are a lot of people living in condominiums who might not have green space. That is why we have these parks. We want people to use them,” Ross said. “Just remember COVID-19 is still very much active in Toronto and we all need to do our part to reduce the spread of COVID-19. Physical distancing is the most effective way of doing that right now.”

Pictures of the crowd at Trinity Bellwoods Park on Saturday were widely circulated online and even prompted Calgary Mayor Naheed Nenshi to deliver a warning to his residents to “not be like Toronto.”

Premier Doug Ford also weighed in, calling the behaviour “reckless” and urging anyone who was at the park to get tested for COVID-19. Health officials, however, later said that those at the park should simply self-monitor for symptoms. 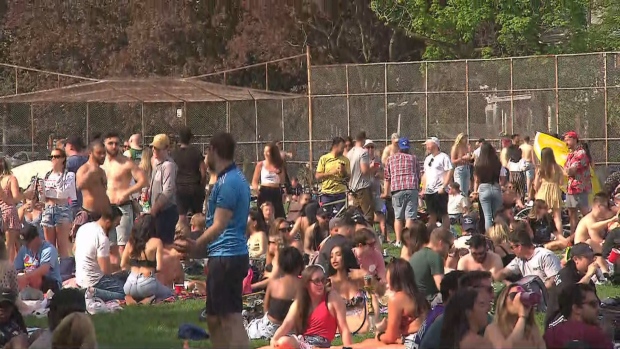 Speaking with CP24 earlier on Thursday, infectious disease expert Dr. Isaac Bogoch said that while the circles are not a “be all and end all solution,” they may provide a low-cost way to remind people of the need to physically distance.

He added that scenes like the one that played out at Trinity Bellwoods on Saturday could certainly hasten the spread of the virus but said that the risk of getting the virus in an outdoor setting remains “extraordinarily low” so long as people remain at least two metres apart, hence the circles.

“Painting a circle in a park is clearly not the be all end all solution but what it does is provide a very inexpensive and very easy to do way to just remind people of where they should be,” he said. “Of course people can ignore them, walk all over them and congregate in large settings but it is just a very simple tool to have that costs virtually nothing and may help remind people to practice physical distancing. I think it is a terrific idea.”

The city has said that it will also reopen the public washrooms at Trinity Bellwoods this weekend after there were reports of people urinating on private property in the area on Saturday.

There will also be an enhanced bylaw enforcement and police presence at the park going forward, Ross said.

"This is friendly endeavour. It isn’t as much about enforcement as it is about education and reminding people of what the rules are," he said, noting that fines will only be issued as a "last resort."