No injuries were reportedafter a home under construction in the city’s west end collapsed Thursday afternoon.

Toronto Fire were called to a three-storey home on Homeview Avenue and Jane Street, north of St. Clair Avenue West, just after 1 p.m.

He said the neighbouring homes had been evacuated.

The cause of the collapse is unknown. 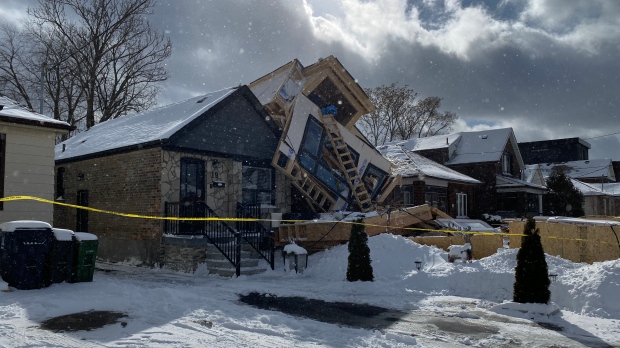 Frank Martins, who is a health and safety consultant of the workers, told CP24 two workers were inside the home prior to the accident. He said they heard a crackling and then a window breaking.

One of the workers went out to inspect, Martins said. Realizing that the house is about to fall, he said the worker screamed at the other worker to quickly evacuate.

"We’re very lucky that the two gentlemen that were working inside are not deceased right now," Martins said. "They're very shaken up."

Neighbours said the homeowner next door was present when the collapse happened.

"He was just shovelling snow and he heard something fall and he looked back and saw the house completely collapsed over," Sandy Da Cunha, who lives on the street, told CP24.

When asked if the weather conditions played a factor into the accident, platoon chief Chris Bertram said it is possible but investigators will look into all possible causations.

According to Environment Canada, winds were gusting at speeds of up to 60 kilometres an hour at the time of the incident.

He said the building would be demolished pending approval by the insurance company.

“It’s fallen down and collapsed enough that it can’t be salvaged," Bertram said. "It has to be picked apart with heavy equipment.”

Bertram said the neighbouring homes did only sustained roof damage.

The Ministry of Labour and city building inspectors have been called to investigate.

TFS is on scene of a structural collapse; house under construction. There are no report of injuries, Toronto Building and the MOL notified pic.twitter.com/XCINEXvCHi