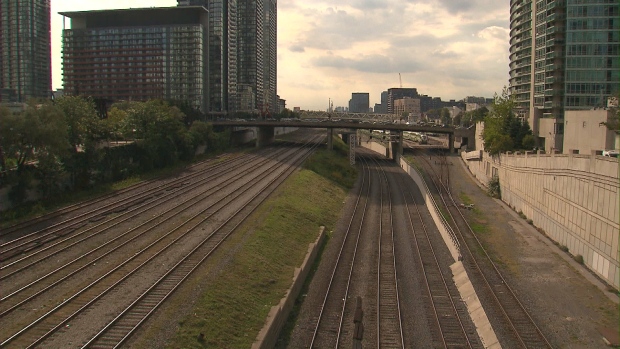 The city is now one step closer to beginning expropriation proceedings to seize control of the air rights above a downtown rail corridor, a move that officials say is necessary to expedite work on an ambitious project that has been dubbed “Rail Deck Park.”

During a meeting on Thursday, members of Mayor John Tory’s executive committee voted unanimously in favour of beginning exportation proceedings for three acres of air rights that are located above the Union Station rail corridor between Spadina Avenue and Blue Jays Way.

According to a staff report, negotiators with the various property owners have been ongoing since 2018 with no resolution.

The report said that there is an urgency to acquire the air rights now so that work on the first phase of Rail Deck Park can be done in coordination with GO Transit rail expansion that is expected to begin in 2022.

“I can’t speak specifically to the debate over the price of the land but I will say that with today’s step we are actually going to get this thing built,” Coun. Joe Cressy, who represents the downtown ward where the park will be located, told CP24 following Thursday’s vote. “We are not going to sit around twiddling our thumbs and waiting three years to agree on a price through negotiation.”

The ultimate vision for Rail Deck Park is a 21-acre continuous green space that would be built above the rail corridor from Bathurst Street to Blue Jays Way.

The first phase, however, only calls for the development of about four acres of green space between Spadina Avenue and Blue Jays Way, an area that is roughly the size of Grange Park.

The city currently owns the air rights for about one acre of that space but needs to acquire the remaining three acres before work can proceed.

The vote on Thursday directs staff to continue negotiations to acquire the property for now but would also authorize them to initiative expropriation proceedings should those negotiations continue to be unsuccessful.

“The current owners of the air rights have a price in mind and we have a different price in mind. We have not been able to come to terms on that which is why, as is our right, we will now move to expropriation if necessary,” Cressy said. “Expropriation is something we do month; in Toronto. We expropriate land for transit project, for infrastructure projects, for watermain work and this is another example.”

If the city does begin expropriation proceedings it will still have to pay fair market value for land, though a 2017 decision by council to zone the area exclusively for parks and open space would likely limit its worth.