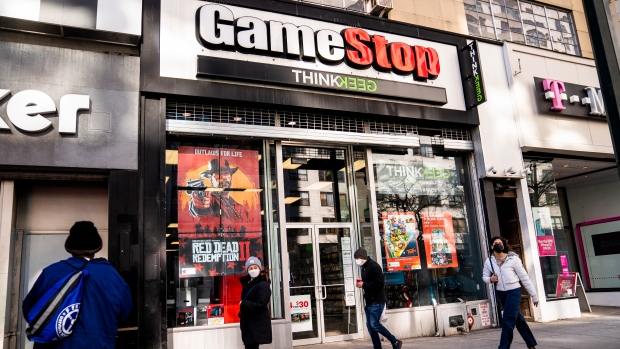 TORONTO - A rollercoaster week of trading for investors in GameStop, BlackBerry and other hot stocks has resulted in trading bans, warning labels for certain stocks and questions over both fairness and systemic risk in the financial system.

Shares in retailer GameStop's soared from about $20 apiece in mid-January to more than $400 at Friday's highs, a four-fold increase in price this week alone amid widespread discussion on social media platform Reddit. Users -- who piled money into GameStop, BlackBerry and a handful of other shares -- were not only looking for a way to make money, but to stick it to the powerful investors and hedge funds who had bet against the stocks.

The resulting volatility caused Canadian investing app Wealthsimple to add a 'risky' label to GameStop, BlackBerry and other stocks, advising traders that they should expect high volatility.

While Wealthsimple said it would not ban trades of any of the stocks involved, chief investment officer Ben Reeves warned on the company's website that followers of the GameStop frenzy could end up being worse off from the trend, adding that trading based solely on online forums is a “pretty lousy strategy.”

“If you have a disproportionate amount of your money in a single stock, I would be concerned for you. If your position is small and you are doing this for fun, I'm not too worried, even if you don't have a great trading strategy,” said Reeves in an article published on Wealthsimple's online magazine.

Reeves also said this week's events are different from past speculative bubbles in that there is some anger over a system that feels like it is “favouring the rich.”

Dean Curran, who studies financial risk as an associate professor at the University of Calgary, calls the GameStop movement “market populism.”

Some of issues playing out in this week's stock market tug-of-war can be traced back to wealth inequality, Curran said. For example, he said, some of the policies coming out of the 2008 financial crisis, and now out of COVID-19, favour people who already owned assets. Curran pointed to central banks' bond-buying programs, and strategies that supported home prices.

“I'm from Ontario, and so many people have seen their life, and level of assets, change through house prices. If you don't have parents that can help you, it's very, very hard to build up a down payment now,” said Curran.

While stocks aren't exactly the same, Curran said the upward momentum of stock markets since the 2008-09 financial crisis has similarly benefitted people who already had the wealth to invest a decade ago.

Michelle Maroto, associate professor in the department of sociology at the University of Alberta who studies systems and social class, estimates that the percentage of Canadians who held individual stocks was much smaller then. Historically, stock markets had high barriers in terms of the amount of money needed to participate, she said, leaving them closed off to most people.

That's changing as commission-free apps become more popular. Wealthsimple Trade says new users increased by 80 per cent to 380,000 between July and December. As of Friday, it was the most downloaded free app in Apple's Canadian store.

“Having other people break into this and start to understand (investing) has been really interesting for me, to think about what might change,” said Maroto. “That's going to depend upon what policymakers do about it.”

Historically, regulations have been based on systemic risks, said Curran, as were “too big to fail” bailouts of during the 2008 financial crisis, The logic, he said, is that an individual retail investor losing money or defaulting on a mortgage doesn't hurt the overall financial system as much as an insolvent bank.

A statement from Investment Industry Regulatory Organization of Canada said the regulator is “concerned” about the impact the increased volatility may be having on some investors, pointing to its use of single-stock circuit breakers, which “are designed to give the market a pause” when a stock moves suddenly.

The regulator said it is important for investors to avoid “betting the farm” on inaccurate or misinterpreted investing information, referencing a bulletin released this fall to help investors.

“In recent months, we have seen an increase in people who are turning to Do-It-Yourself investing and this is why we created an investor bulletin,” the regulator said.

Tracey Bissett, a Toronto-based chartered financial analyst, said it will be interesting to see if the practice of labelling risky stocks continues. Bissett said such labels would ideally have disclosure and transparency around how a company such as Wealthsimple came up with the “risky” assessment.

Some online investment products are marked with a sentence that notes the inherent risk of any investment, she said but the warning is sometimes not very prominent.

“It would be challenging for them to do it all the time, because they may run into fundamental differences of opinion with the companies, so they might open themselves up to liability,” said Bissett.

Bissett added that there is a possibility that labelling risky stocks could potentially perpetuate an idea that investors don't need to do their own research on investing risks, or that a non-labelled stock is risk-proof.

“What if they get into something that Wealthsimple didn't label as risky, and then something happens?” said Bissett. “I think there's a whole can of worms that could open up there.”

On the Wealthsimple website, Reeves says his main concern is the ultimate cost to unsophisticated investors.

“The sad part about this method of protest to me is that it will mean that most of the less informed, less powerful investors will be the ones who lose a lot of money.”