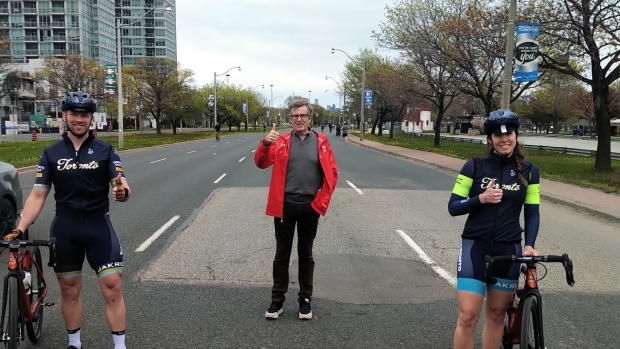 Mayor John Tory says that the weekend closure of dozens of streets to make way for pedestrians and cyclists during the COVID-19 pandemic could serve as a “living experiment” of sorts that may lead to more permanent changes down the line.

The city has already restricted more than 50 kilometres of roadways to local traffic only in an attempt to free up space for recreational uses and for a second weekend in a row it will close several major arteries to vehicles, including the eastbound lanes of Lakeshore Boulevard West between Windermere Avenue and Stadium Road and the eastbound lanes of Lake Shore Boulevard East between Coxwell Avenue and Kew Beach Avenue.

All areas will close as of 6 a.m. Saturday and reopen to vehicle traffic on Sunday at 11 p.m.

“We are using this as a living experiment,” Tory said during an interview with CP24 on Friday morning. “A living experiment meaning that we are seeing in these very particular times if people use this and it keeps them safe and if it acts as a safety valve in many different respects and it will help us make decisions for the long-term.”

Numerous cities have already introduced similar programs to reallocate road space to pedestrians during the pandemic, including New York City where Mayor Bill de Blasio has committed to opening up approximately 160 kilometres of roads.

Speaking with CP24 on Friday, Tory said that he went down to a few of the shuttered streets last weekend to see for himself whether people were taking advantage of the closures and found “thousands of people from every age group and every part of the city” cycling, walking and running.

He conceded that there was some negative feedback from drivers on Saturday morning due to a lack of signage but said that those issues will be rectified in time for this weekend.

“It is going to be even bigger this weekend and a bigger opportunity for people to have safe physically distanced cycling, walking strollering and all that,” he said.