Woman facing charges after climbing up crane near Gardiner Expressway

Toronto police have laid charges against a woman who allegedly climbed up a crane in the city’s Bathurst Quay neighbourhood and had to be rescued early this morning.

Toronto Fire District Chief William Bygrave told reporters that the woman climbed about 40 to 45 metres to get to the cab of the crane, which was located at a closed construction site near Lake Shore Boulevard and Bathurst Street.

It is not known exactly when or how the woman got up the crane but police said they were first notified of the incident at around 6:40 a.m.

“There was security during the evening but no night shift working (at the site),” Bygrave said. “Sometime during the night she must have gone over a fence.”

He added that there is a ladder that leads to the cab of the crane, which is likely how she climbed up.

Members of the Emergency Task Force, firefighters, and a high angle rescue team were called to the scene this morning to try to get the woman down.

Police said they were at one point concerned that the woman may move from the operations booth to the boom of the crane, which partially hangs over the Gardiner Expressway.

“The Gardiner Expressway was shut down, I believe two lanes, in case she went out on the boom,” Bygrave said. “So a lot of people are put at an inconvenience and risk over this.”

Power was shut off to the crane while crews spent approximately an hour trying to convince her to come down.

“Crews went up and talked to her and it took a while. She wasn’t too compliant but eventually they got her and talked her into coming down,” Bygrave said.

Shortly after 8 a.m., the woman had been restrained and fitted with safety equipment.

She was brought down to safety and was transported to hospital in police custody.

“She seemed to be in relatively good health,” Bygrave said.

Police said Thursday afternoon that the woman damaged the crane, rendering it inoperable.

Flockhart is scheduled to make a court appearance on Friday.

This is not the first time crews have undertaken a rescue operation to bring down a person trapped on a crane.

Last year, a 23-year-old woman scaled a crane in the area of Church and Wellesley streets, prompting a lengthy and resource-heavy rescue to get her down.

“It happened yesterday apparently at Spadina and Fort York,” he said.

“It is not uncommon. It does happen. People get into these sites and they climb up the cranes for some reason and it is pretty dangerous. You’re putting a lot of people at risk.”

First responders are seen after rescuing a woman from a crane in downtown Toronto on Thursday, August 16, 2018. THE CANADIAN PRESS/Christopher Katsarov A crane where a woman was rescued is photographed in downtown Toronto on Thursday, August 16, 2018. THE CANADIAN PRESS/Christopher Katsarov 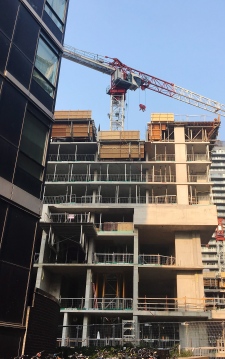 Emergency crews work to get a woman out of a construction crane cab on Toronto's waterfront on Thursday, August 16, 2018. THE CANADIAN PRESS/Victoria Ahearn