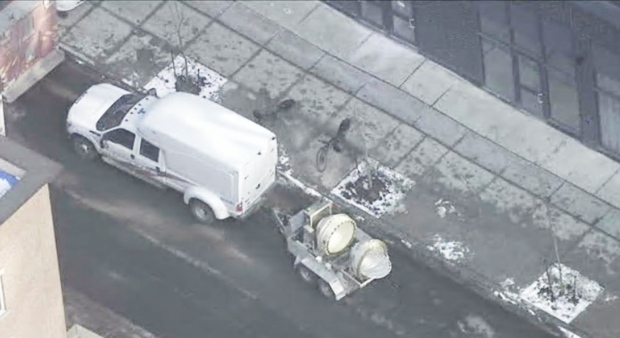 A container used to detonated seized explosives is seen hitched to a TPS pickup truck in Liberty Village on Feb. 15, 2021. (Chopper 24)

A 23-year-old woman is facing numerous charges in connection with an incident involving explosives near the Liberty Village area earlier this week.

Toronto police responded to an apartment building near Wellington Street West and Strachan Avenue just after 11:30 a.m. on Feb. 15 for a check address call.

After attending the scene and obtaining a search warrant, police said officers from the 14 Division Major Crime Unit allegedly seized quantities of drugs, including fentanyl and cocaine, and a loaded Glock handgun with extra ammunition from one of the apartments in the building.

A number of explosives were also allegedly discovered in the apartment, prompting police to call in its bomb disposal unit. Police said the area was immediately cleared to ensure the public’s safety.

Bomb disposal equipment, including a mobile explosive ordinance disposal container on a trailer, was spotted at the scene, as well as vehicles from other units, including forensic identification.

On Friday, police said Talicia Bryan, of Toronto, was arrested and charged with 25 drug, firearm and explosives-related offences, including ten counts of possession of explosive device, unauthorized possession of a firearm, and possession of schedule I substance for the purpose of trafficking.

Police said it was an isolated incident, and there is no wider threat to the public. They are also not looking for any other suspects in the investigation.