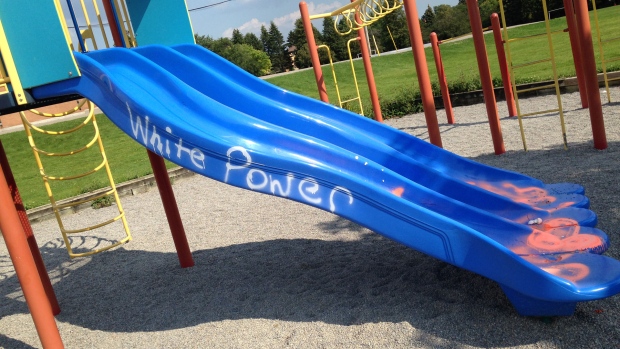 York Regional Police are investigating after anti-Semitic and race-related graffiti was found scrawled at three Markham schools over the weekend.

Disturbing messages that equated Jewish symbols with Nazism and made reference to the KKK and “White Power” were found on playground equipment at William Armstrong public school on Major Buttons Drive by passersby Sunday.

Similar graffiti at was also found at Reesor Park P.S. on Wooten Way and at Markham District High School on Church Street.

Insp.  Alvara Almeida told CTV News Toronto Sunday that the incidents are being treated as a hate crime.

“The messages are anti-Semitic and racial in nature,” Almeida said. “We’ve been investigating throughout the day and as early as 6 p.m. this evening we’ve determined that all three are connected and we believe the same group of individuals are responsible for all three incidents.”

Almeida said police are now working to identify the perpetrators.

“We treat these matters very seriously given the nature of the material and the messages that were painted onto school property,” he said.

The York Region District School Board has been contacted to remove the graffiti.

Almeida said police are asking anyone with information about the incidents to contact York Regional Police or call Crime Stoppers anonymously.