NFL players have a life expectancy of 55 years: study

A University of North Carolina study is painting a sobering portrait of head trauma and the long-term affects on professional football players who take thousands of hits to the head over their careers.

In what may be the most stunning revelation contained in the study, doctors determined that the life expectancy for all pro football players, from quarterbacks to kickers, is 55 years, while some insurance providers say it is 51 years.

Conducted by the Matthew A. Gfeller Sport-Related Traumatic Brain Injury Research Center at UNC, the study found that repeatedly concussed NFL players have five times the rate of mild cognitive impairment than the average person, while retired NFLers suffer from Alzheimer's disease at a 37 per cent higher rate.

In addition to concussions and permanent brain damage, researchers also pinpointed other concerns, including memory loss, blurred vision and reduced blood flow due to repeated blows to the head and body.

The groundbreaking findings have caught the attention of the CFL and its players, who discussed the study at last week's CFL Players' Association meeting, according to a Globe and Mail report.

The CFLPA board is interested in adopting the NFL's approach to curbing dangerous hits, which includes stiffer fines and suspensions.

At least one player, Winnipeg Blue Bombers defensive lineman Doug Brown, hopes progress is made to protect pro football players of the future. 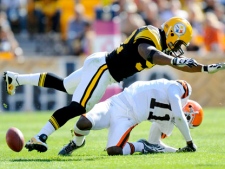