Investigators are probing the cause of a fire that destroyed or damaged several vehicles at a truck yard early Monday morning.

Peel Regional Police said emergency personnel were called to the truck yard on Bramalea Road, south of Highway 407, at about 2:15 a.m.

Police told CP24 that the circumstances – several unattended trucks catching fire in an unattended yard early in the morning – are suspicious.

However, the cause of the blaze hasn't been confirmed.

It was one of two fires involving tractor-trailer units overnight.

There is no evidence that the fires are related, police said. 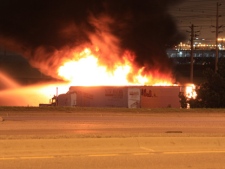